Hat Trick of British Titles For Steve and Adrian

"We were greeted in Derby by humid sunshine, occasional showers and a strong, swirling wind. Not ideal, but we’ve run in worse and it’s the same for everyone, right?!

Adrian was up first in the 1,500m.  Ignoring the wind, he went straight to the front to dictate the pace, winding it up another notch with each passing 200m. This had the desired effect of breaking his rivals into submission, and he’d broken comfortably away well before the finish to take a strong, solo gold medal. What a start to the championships.

An hour later, I raced the 400m. It was obvious I was the middle distance runner when everyone else got into their starting blocks and I was still standing. Still, couldn’t let that put me off, and I don’t think I lost much, if anything at the start. I tried to relax through the 1st 250m and came onto the home straight almost level with two others. Then it was eyeballs out to the line. I’d saved a tiny smidgen for the last 25m and boy did I need it, as I edged ahead to win by just 0.2sec. Needless to say, I was swimming in lactic acid after that and now had four hours to recover for the 800m when I’d face, amongst others, my great friends and training partners Adrian and Phil.

Eleven  athletes lined up for the 800m and, thank goodness for me and Adrian who’d left so much on the track in our earlier races, it was a tactical affair. We went through in 70sec, and it actually slowed over the next 200m as a sizeable lead group braced for the inevitable sprint finish. I took the initiative and went with about 120 to go. Adrian was hot on my heels and the 2 of us broke clear, battling for gold. Of course, I didn’t know it was him, I just heard someone’s footsteps closing in on me with about 50 to go. So I dug in harder and heard those footsteps fade just a little as I tried to hold my form to the line. Phew! We crossed the line in gold and silver, bringing the Brighton Phoenix haul to 3 golds and a silver.

Huge applause to Phil Grabsky who finished 9th in that race, only 0.3sec outside his PB. A great performance in such challenging conditions, which bodes well for the rest of his season.

No time to rest on laurels, we all are back training hard for the world champs in Finland, which starts on 28th June. Big thank you to our amazing F3 training group coaches at Brighton Phoenix, Malcolm Kemp and Dan Maskell, who you’ll see shouting times and other things at us on our Wednesday and Saturday track sessions.

Finally, remember it’s all about the track and never too late to start competing on it!" 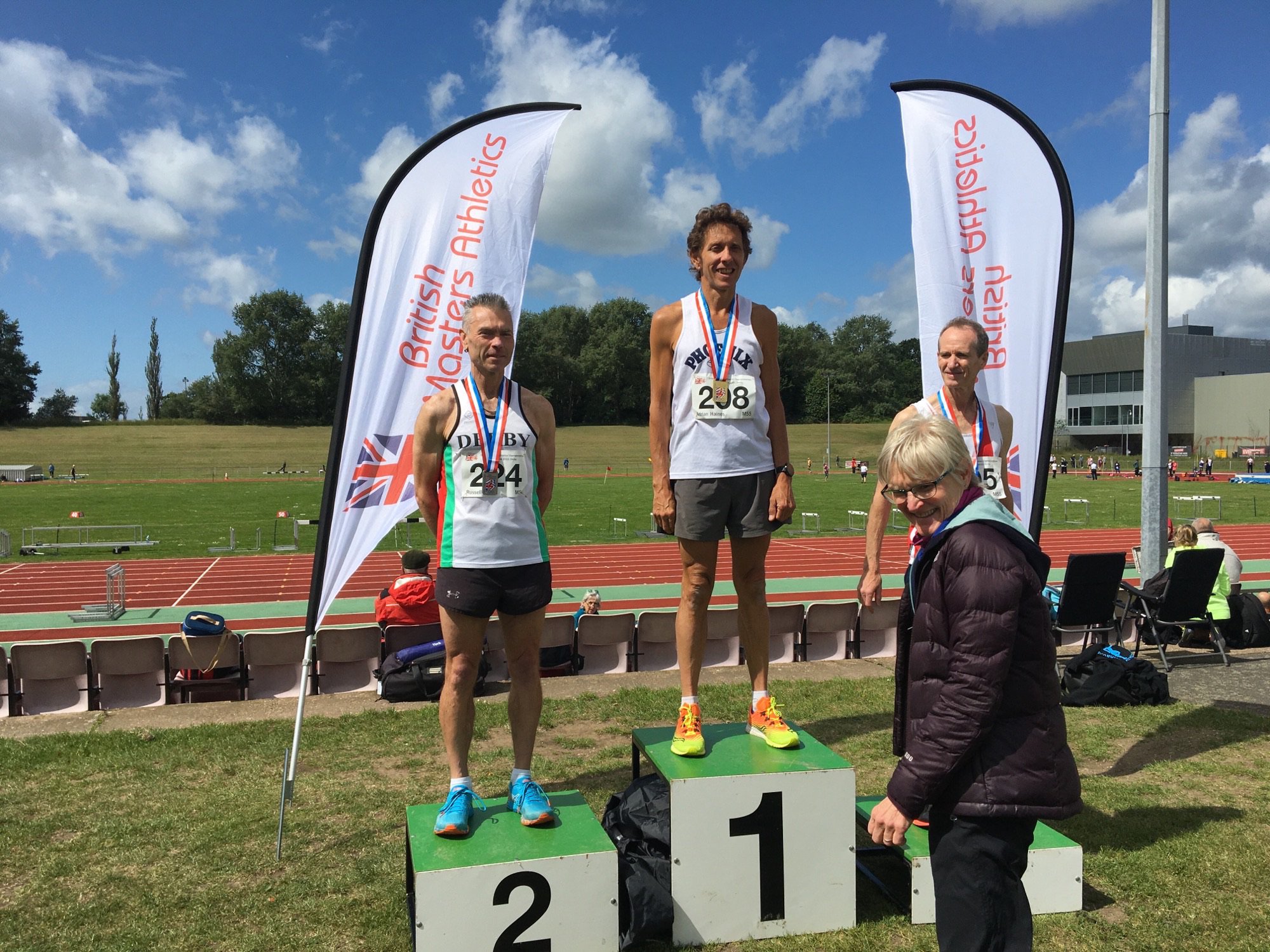 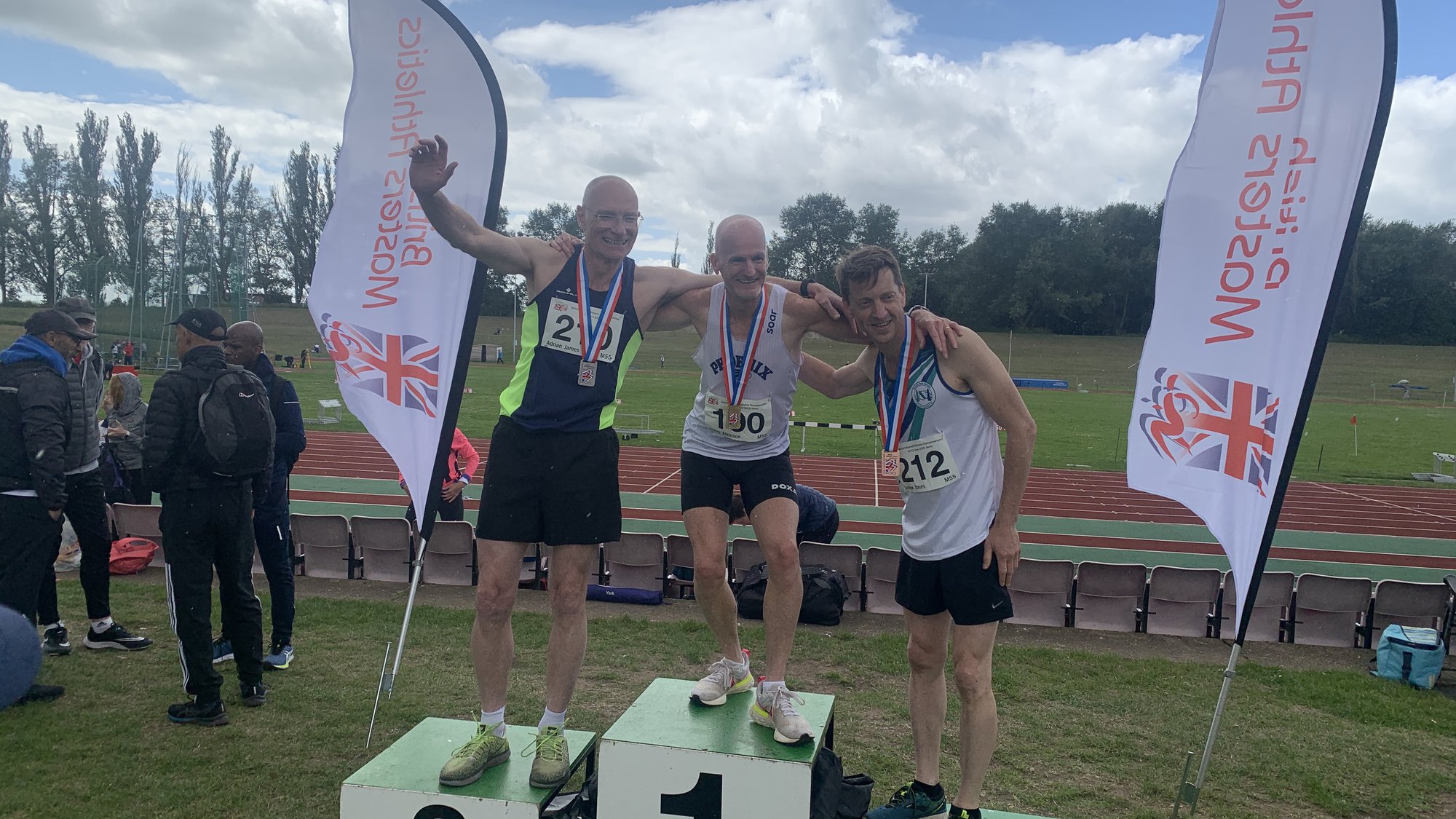 Steve on the podium for his 400m win 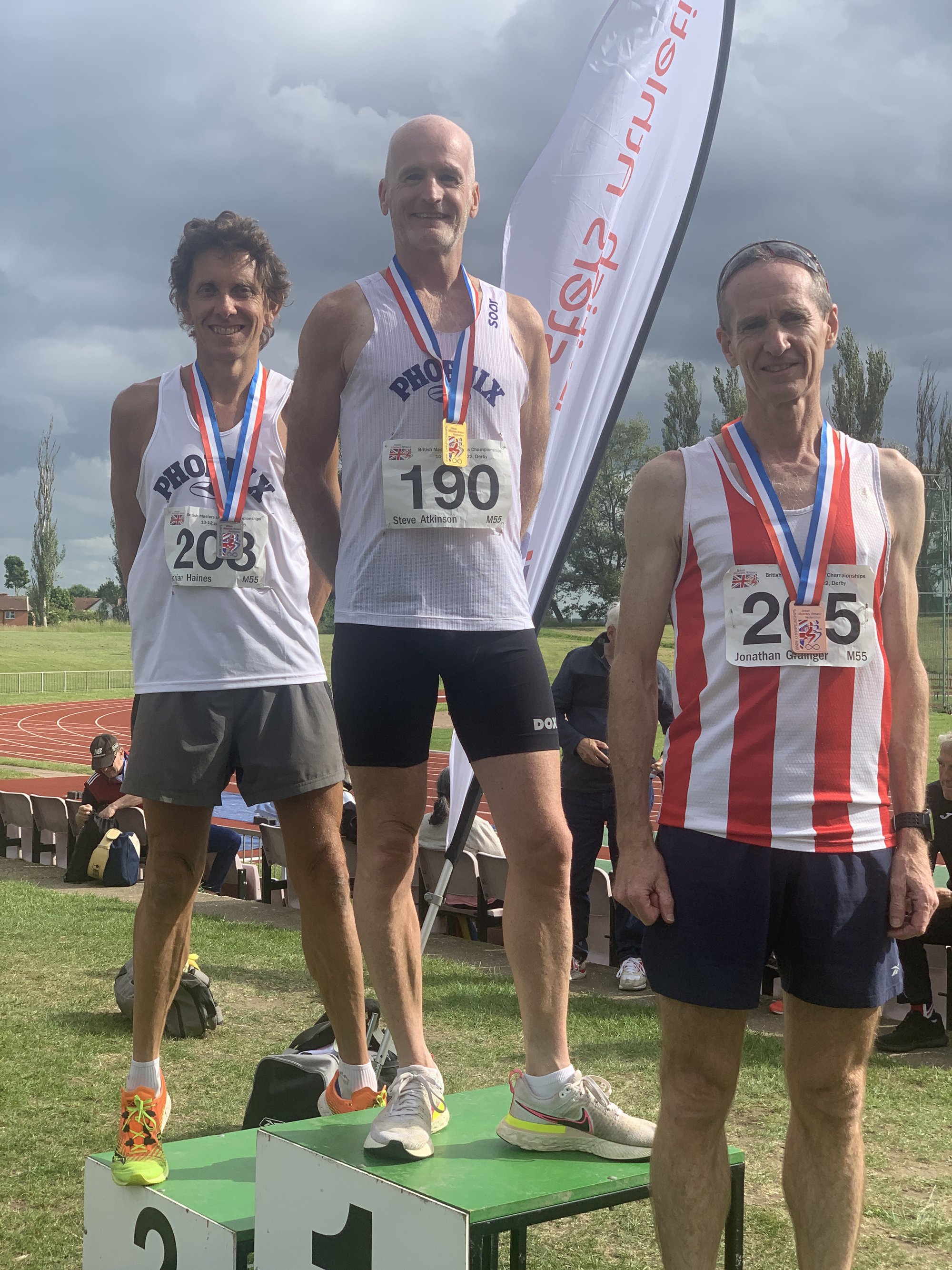