Phoenix were aiming high as defending A team champions, a women’s team looking to build on 2021’s third-placed finish and a strong Vets team oddly wholly made up of event newcomers.
And they delivered. The “somewhat green” V40+ squad brought home the Vets title - and fourth overall - with a club record (beating 2015’s previous best mark by nearly six minutes) to claim the Dave Roots Memorial Trophy in 11 hours and one minute.

The A team’s class of 2022 knocked a cool 17 minutes off their predecessors’ winning time the year before, though had to narrowly settle for second place to Henfield Joggers. A great result, making light of late squad changes in taking the battle to the final two legs.

The women’s team delivered in spades too, with their own club record time at 13 hours and 11 minutes, three minutes quicker than the 2019 Phoenix best – enough for a richly deserved third women’s spot.
The women’s team overcame late injuries for their 630am kick-off with Laura Lodge stepping in with three days’ notice and no recce action. All three opening legs were strongly contested though Stubbington and Brighton & Hove eased from the field. Sarah Roberts then made inroads with five overtakes on leg 4 as Phoenix rapidly caught the earlier 6am starters.
It was not only non-running captain Chelsey Powderhill’s driving that kept up the pace, as Phoenix continued to jostle for overall position with the Mixed Vegan Runners team, spicing up the fun at every single changeover. An unfortunate error late on from B&H opened the door for Phoenix women to claim third spot, and a realisation that the club mark was within reach.
Lizzy Miles brought home the record after a raucous final handover, and was determined to cap off a sensational team effort behind victors Stubbington and Arena.
Three teams were primed to compete for the A race title, and Phoenix’s chargers brushed off their own late injury swaps – four in total - to take Henfield to the wire, and stay well clear of an impressive Arena, who eventually finished third.

Club captain Tom Hooper stepped in to answer SDW Relay skipper Tom Clewley’s late call, and Keir Macdonald took on learning his legs digitally via Strava, You Tube and Google Map within a week. However, undoubted late hero was Paul Weir, heading down from Yorkshire with 24 hours’ notice; Clewley’s call of the wild was strong…!
And Clewley’s prediction of a close race played out at the final 9am start with the favoured teams, which saw Phoenix opener Jamie Signy – hot off second spot at Three Forts – placing Hoops in a strong position at the first handover.
Hoops put a great shift but “The Henfield Destroyer” Jon Barnes bagged an impressive set of three legs, enough to elicit a forlorn cry from our man Hooper: “I’m running faster than last year and he’s just taken 5 minutes out of me. He’s making me look bad!”.
Keir and Weir ensured it remained tight between front-runners Phoenix, Henfield through to leg 17, where Jamie C piled on the pressure, but Barnes was the difference. The Phoenix A team was finally over the line in 10 hours and 38 minutes for silver, only some 90s adrift of the Joggers. It was in no way down to Mike Townley’s driving that the A team were last back to Sussex…
And so, to the successful Vets team – James Hampshire, Tim Clarke, Austen Hunter, Jon Clays, Nick Alexandrou and Stuart Roberts, under the sat-nav guidance of driver Richard Thompson – all fresh-faced to the event and raring to go at a sunny Beachy Head.
Defending champs Stubbington Vets were up for the nip-and-tuck, but by the time Clays (32.40) had claimed the first of the day’s Vets club records at the excellently marshalled Ditchling Beacon – the ned of leg 5 - Phoenix slowly took an iron grip.
More Phoenix Vets marks fell on legs 7, 8, 9, 11 and 15 (Roberts, Hampshire, Clarke, Clays and Clarke, [again]) with an in-form Hunter crashing through leg 16 just 11 seconds off another.
Anchor man Alexandrou was also (twice) just a few seconds off record Vets times, but deservedly brought home the trophy-winning final leg with a super-strong finish – and was doused in bubbles for the honour. An anxious wait for later starters Basingstoke & Mid Hants AC Vets passed without further incident, and the corks were popped!

Yes, all three performances were impressive, the times strong and celebrations, erm, robust – but once again the team spirit, volunteers (especially at Ditchling ), event organisers and Phoenix co-ordinators - created a belter. Here’s to 2023!! 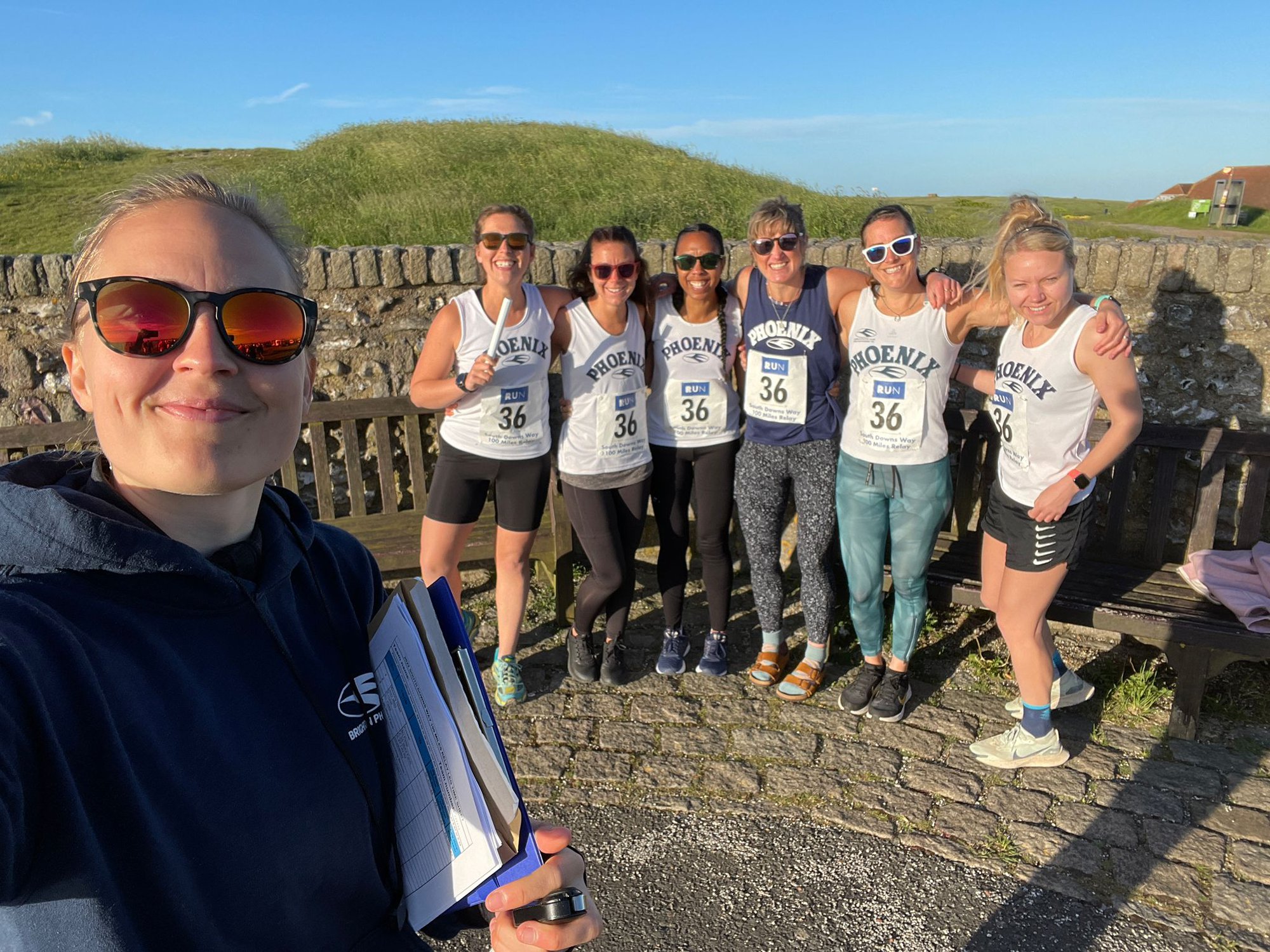 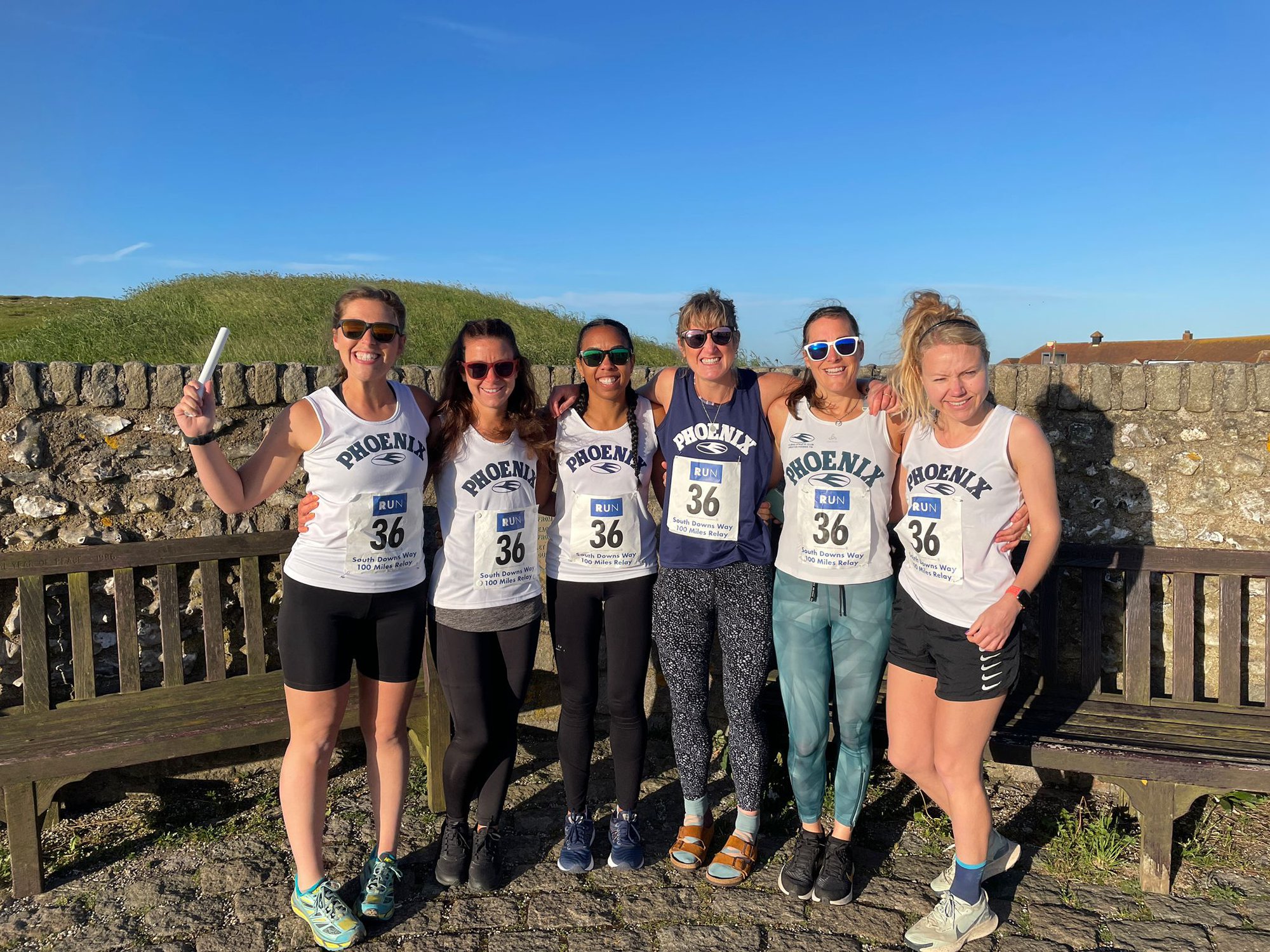 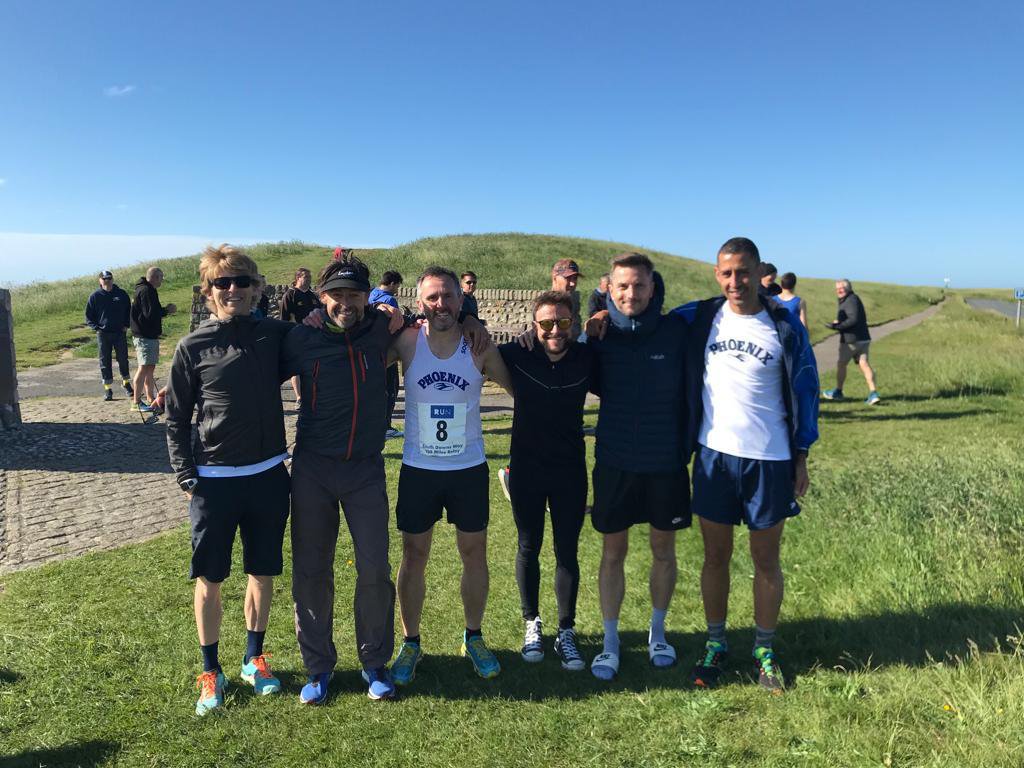 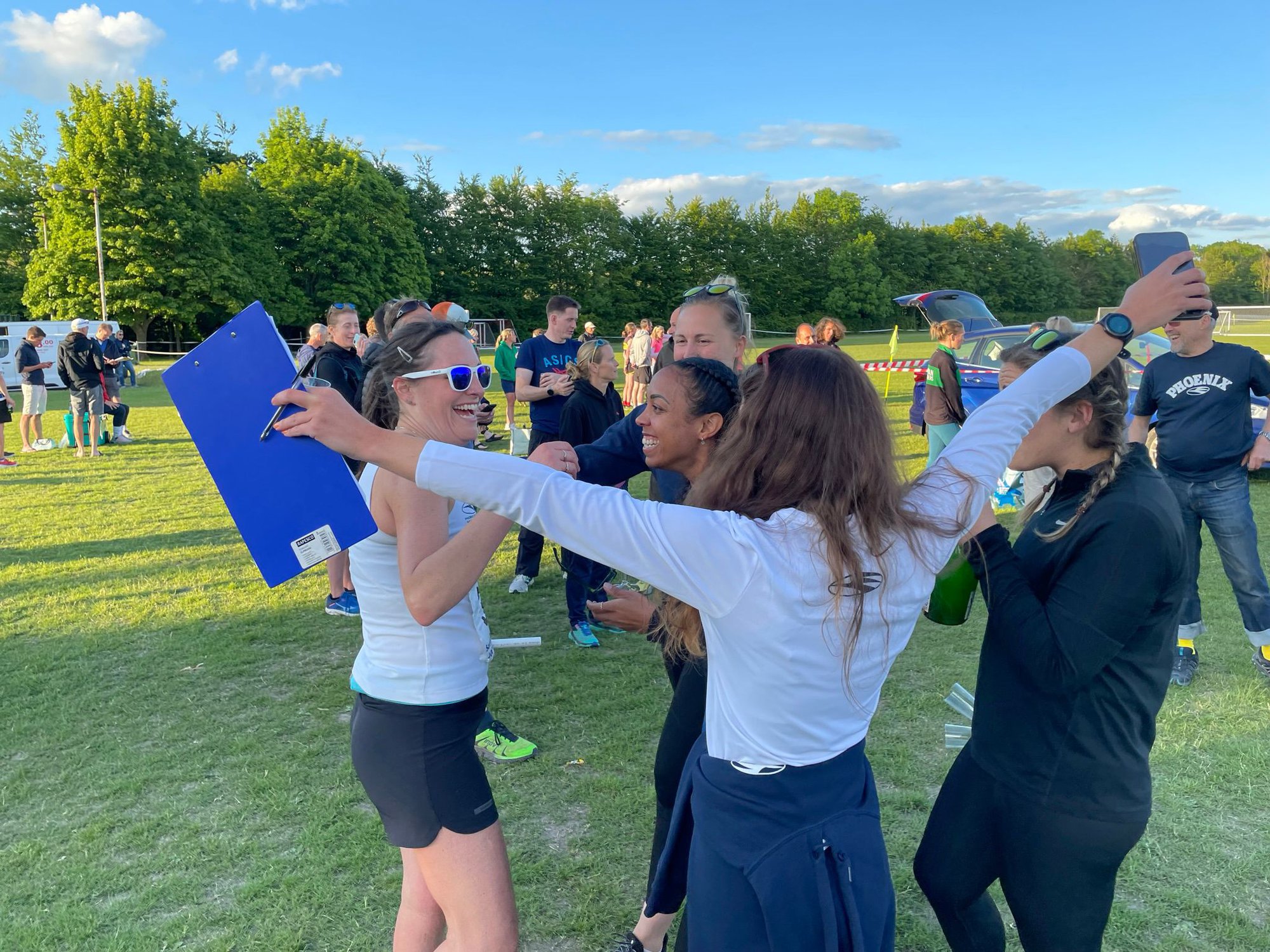 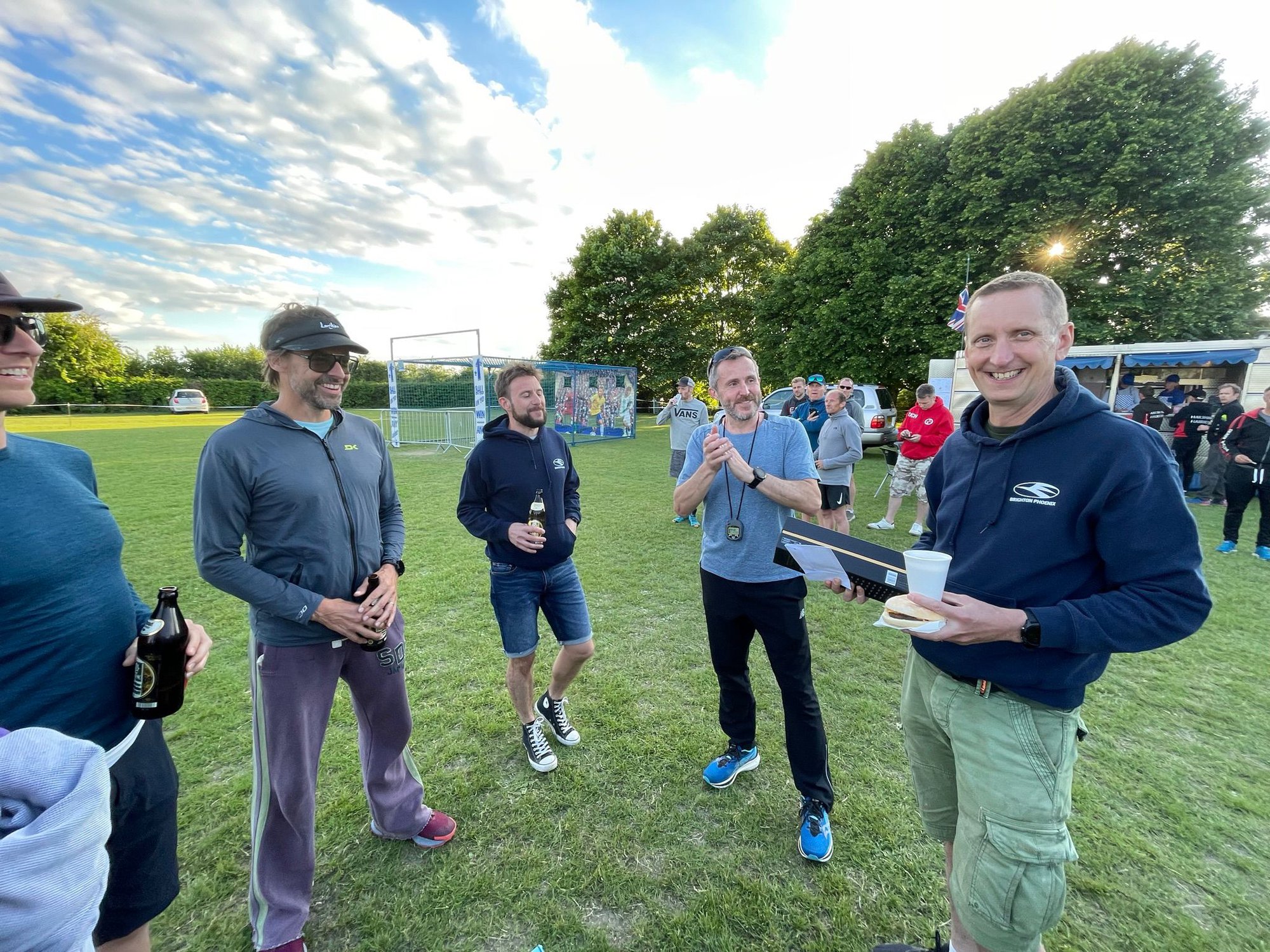 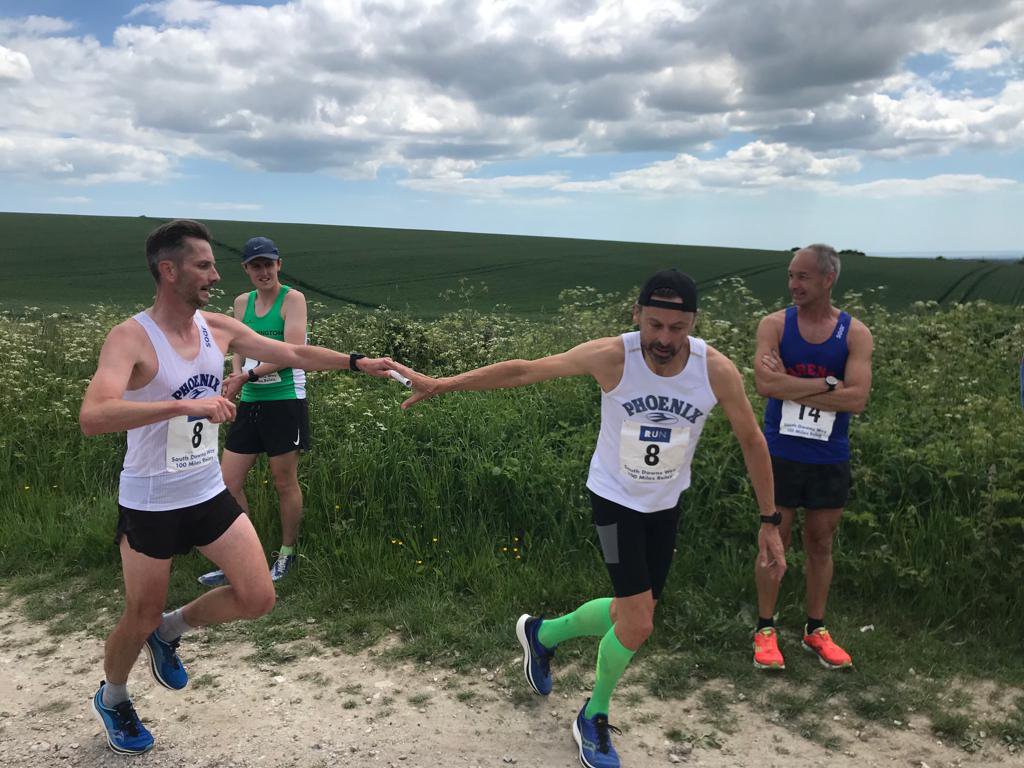 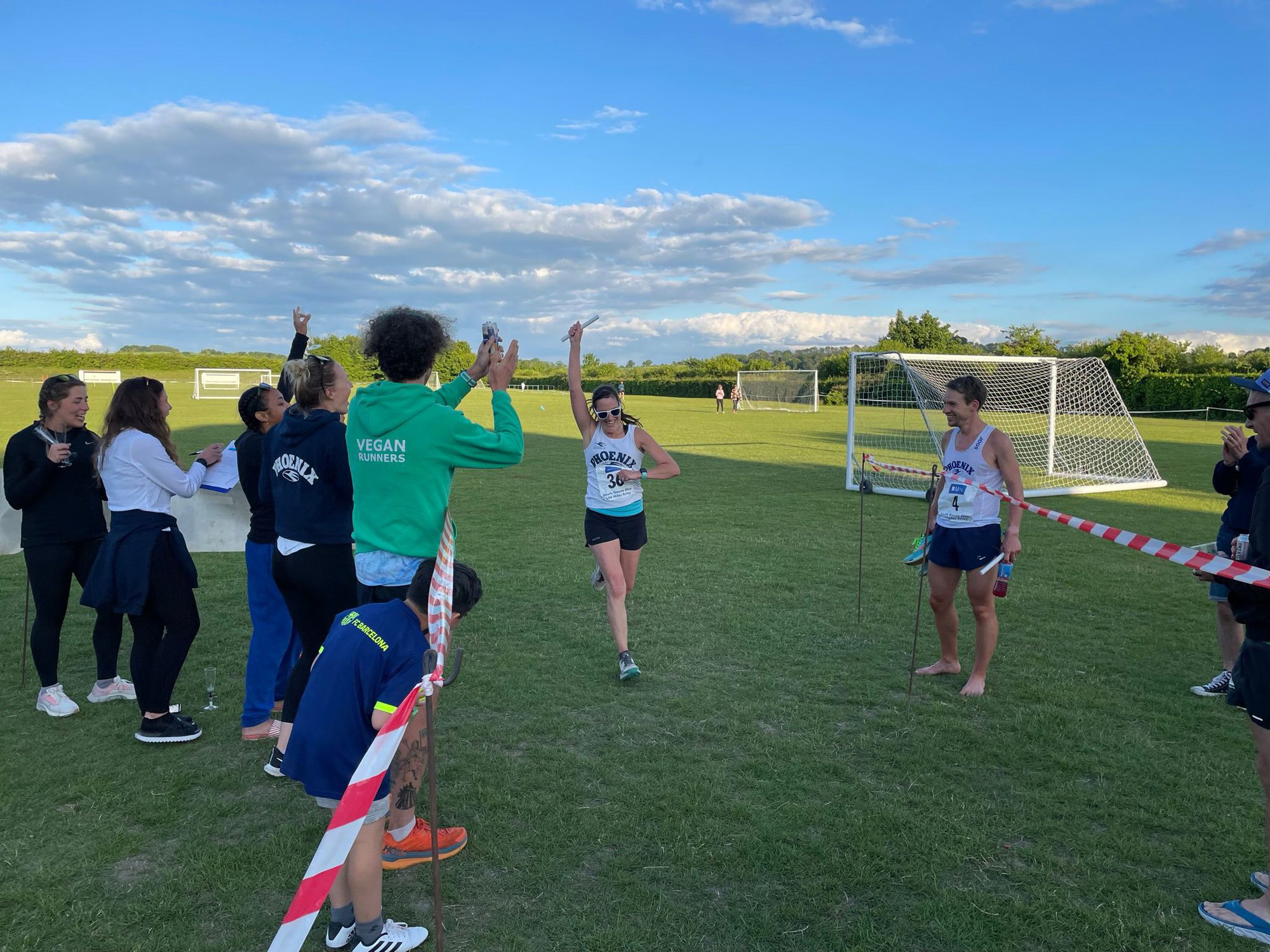 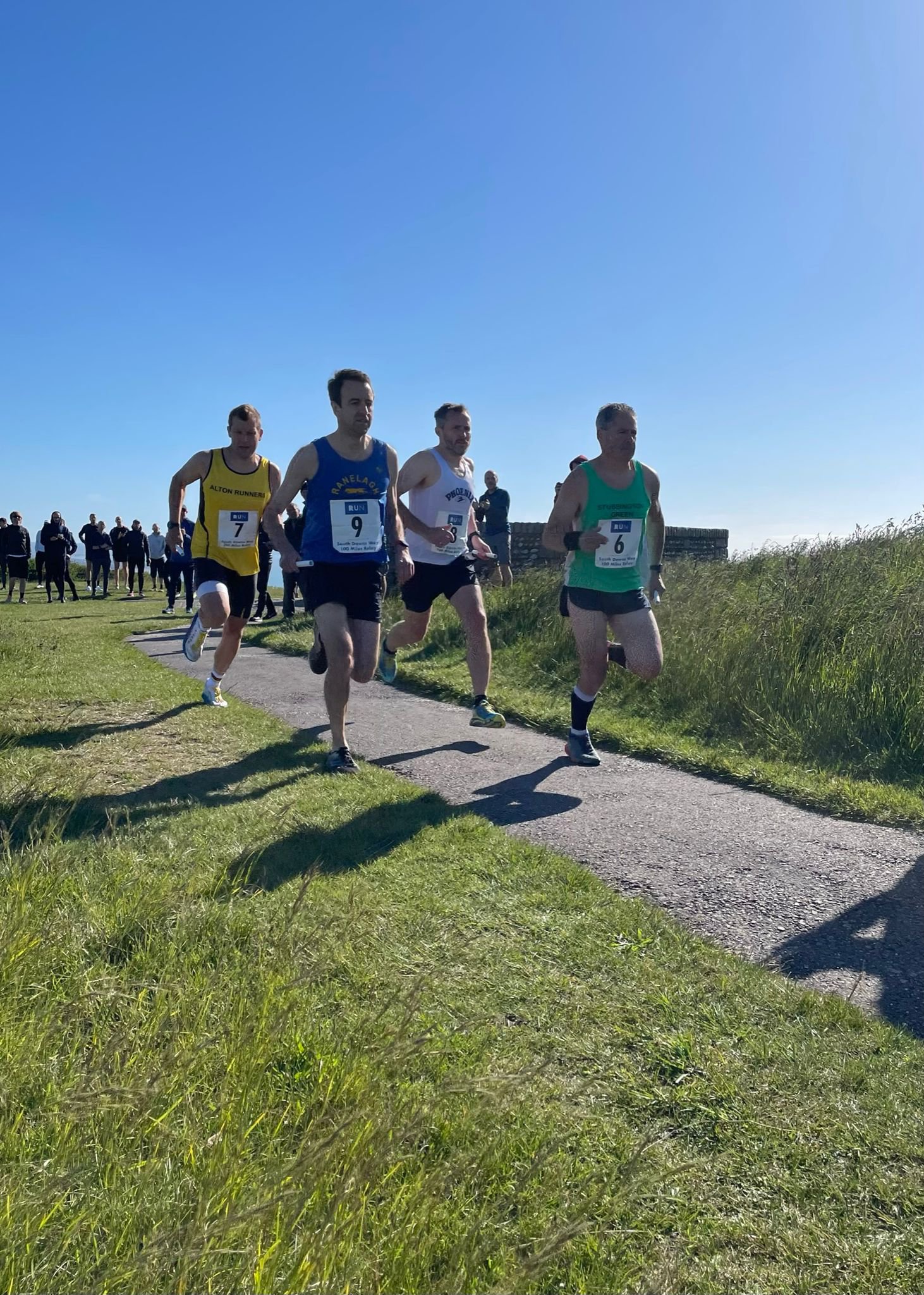 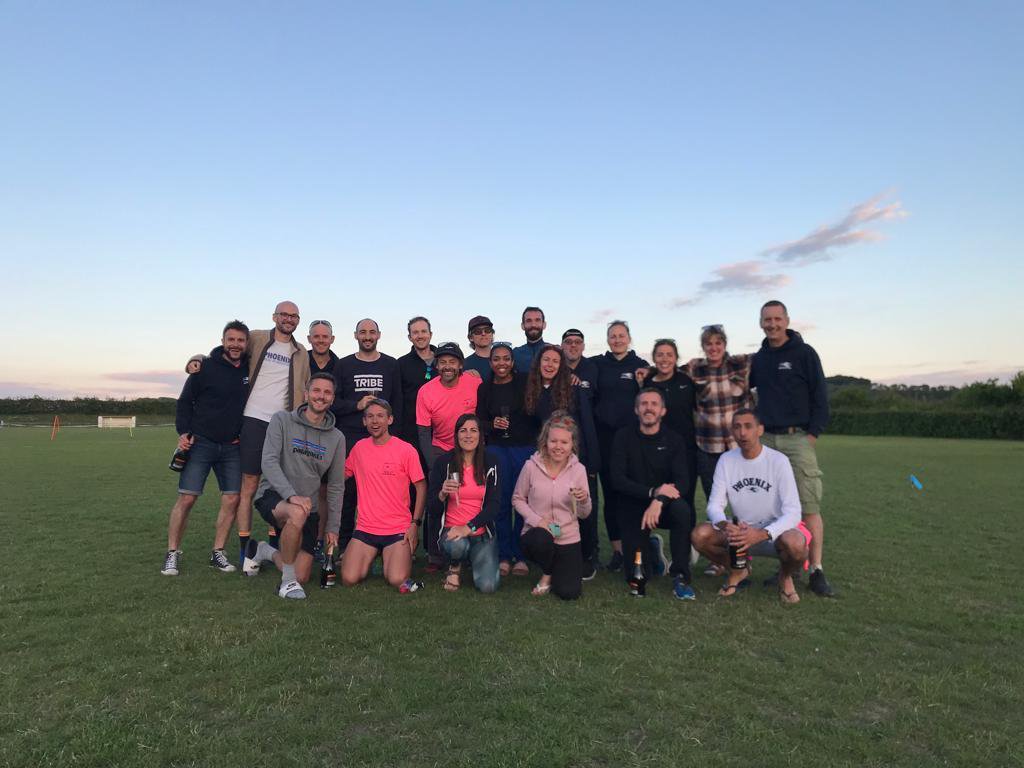 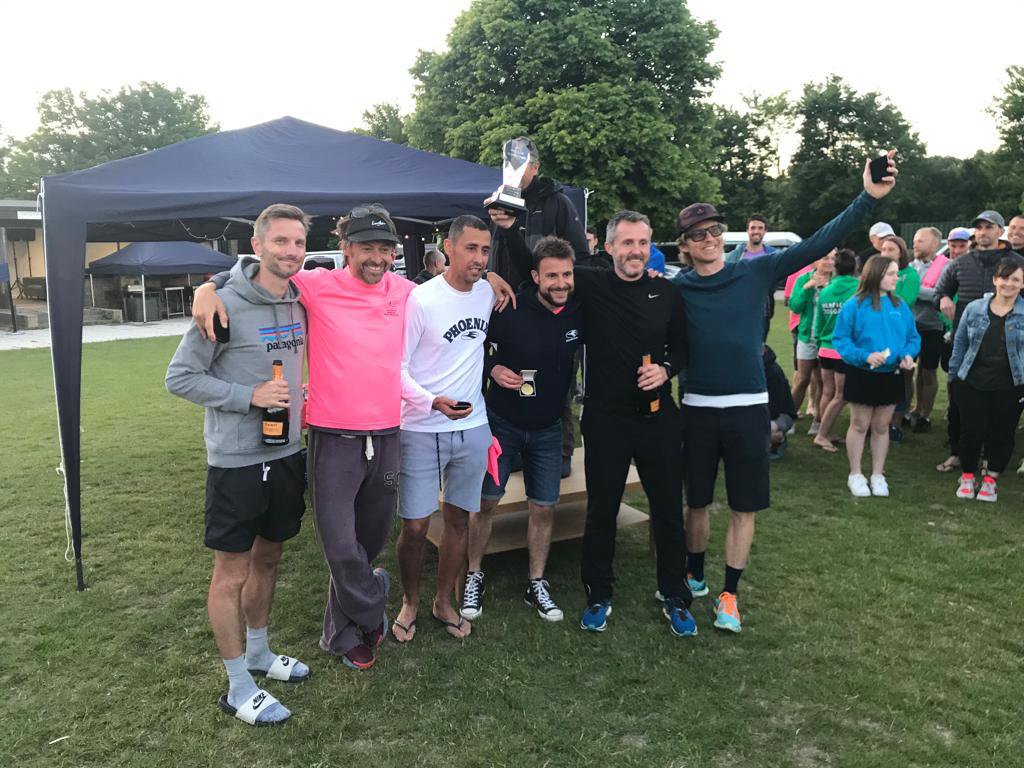 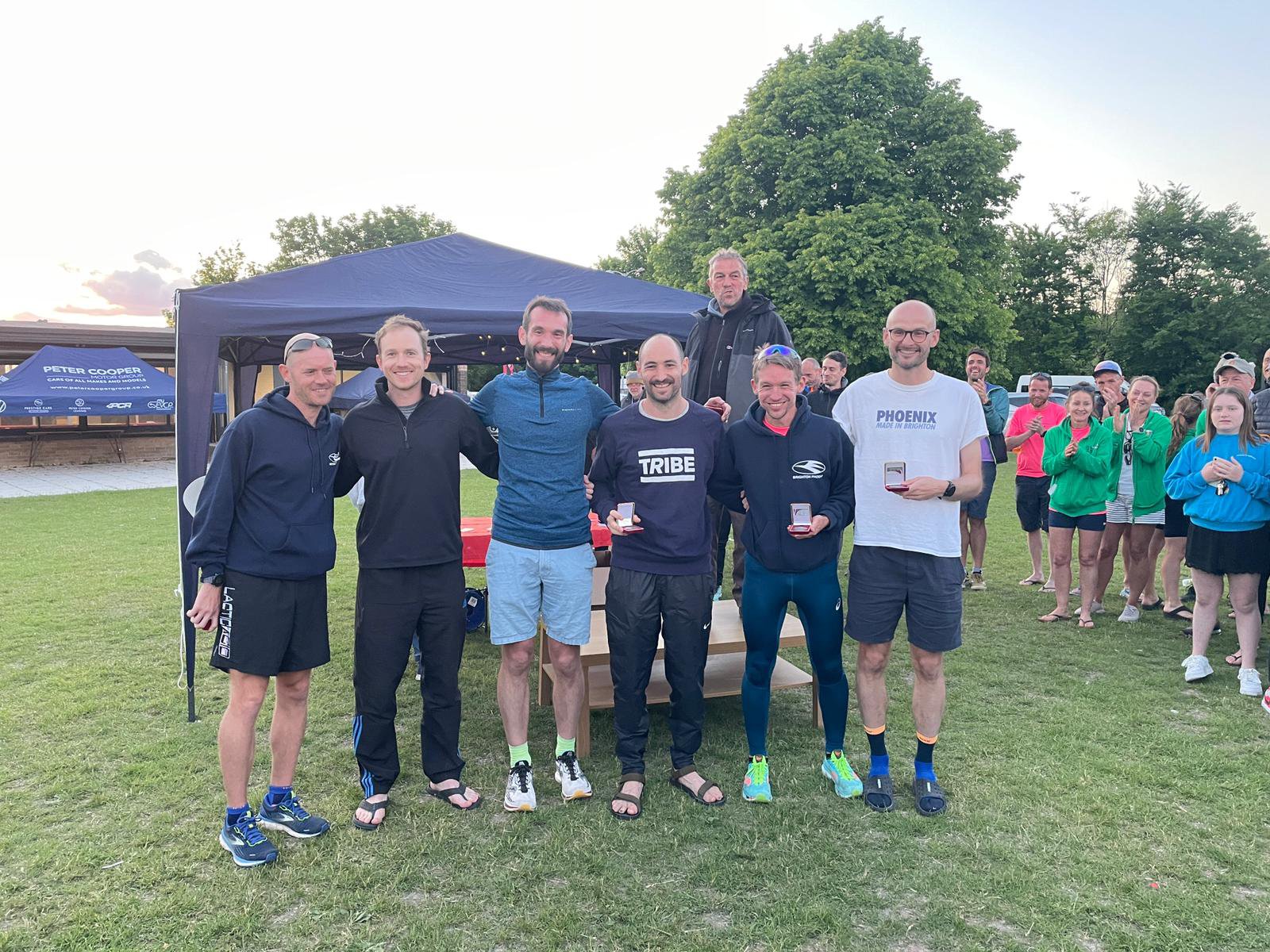