Geoff Pike does his first cycling time trial and encourages other multisporters to give them a go. Here's his review of the Brighton Mitre (Hilly) 25 mile TT...

Although I’ve done quite a few triathlons the world of cycling time trials had eluded me up until Monday 4th April, when I broke my duck in the Brighton Mitre 25 Mile (Hilly) TT. I’m writing this partly to encourage other multisport athletes that these events are open to us…give it a go!

I was only aware of the race thanks to a message from Andy Bone. You have to be a member of a club affiliated to Cycling Time Trials (CTT) to hear about them it seems, let alone take part. But in case you’re interested, Phoenix is registered with CTT so members can take part, you just have to register individually with CTT (free) and select Brighton Phoenix as your club. Often you have to enter around 2 weeks before the event date and sometimes choose whether you are racing on a road or TT bike. They are cheap too, especially compared to triathlons…just £14 for this one.

It’s a simple idea and process. Apparently, as Brighton Mitre explain on their website, all you need is a bike...not strictly true but you get the idea. Interestingly, under CTT rules you don’t even need a helmet, although most clubs will recommend/enforce wearing one. Notwithstanding H&S concerns, it's endearing that so little has changed in CTT regulations and the organisation of time trials, since their origins in the 1920s. This said, FT Bidlake, who conceived the idea, might raise an eyebrow at the evolution of the bike!

Here is a link to the CTT website that gives a fascinating overview of the origins of time trialling and how you can register: https://cyclingtimetrials.org.uk/ For the record Phoenix is also affiliated to the East Sussex Cycling Association (ESCA) and details can be found here: https://eastsussexca.org.uk/ 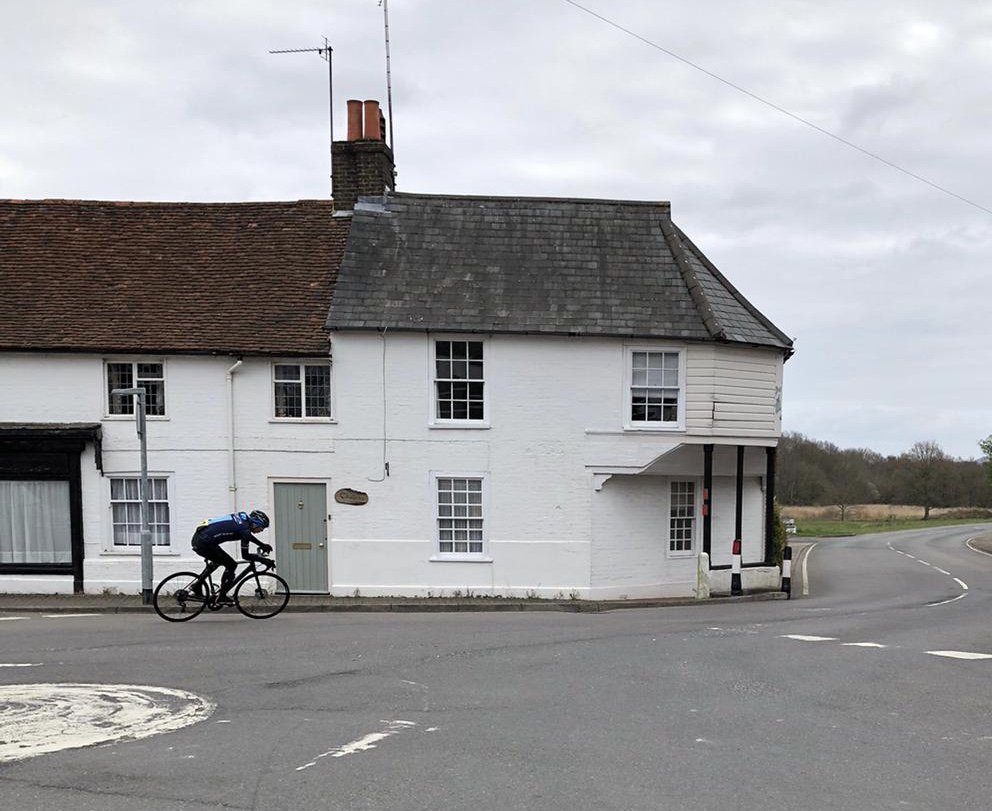 For some reason I was more nervous before this event than I have been for a while. Probably because it was a new racing experience (and I always get a little nervous before a race) but maybe it was because when I did a practice run, my time for the relevant TT Strava segment, despite trying reasonably hard, was 92nd out of 100...was I out of my depth?!

The morning started at 5.30am (having been awake since 3am!). Bit of breakfast, check I’ve got everything (including safety pins – Covid meant the usual registration process was pared down even further with a self service 'system') and head off to Saddlescombe Road meeting Jim Whitelegg, Tom Sanderson and John Marinko on the way as we were all starting within 15 minutes of each other. It was reassuring to know a few others taking part and see a few friendly faces, albeit people I knew were somewhat quicker than me! Fortunately, I met Ginny, a Brighton Mitre rider, while waiting who was proudly telling me how she had entered her first one a few days earlier and was last…but it hadn’t put her off going again, rather it had encouraged her!

It was cold and windy and once there the start couldn’t come soon enough as about a minute after finishing warming up I was cold again! But first you had to find a sheet of paper, sign in (I forgot!), pick up your race number and pin it to your lower back. It was all very low key and felt, like the origins of time trialling, a bit cloak and dagger and being part of a secret society. This stems from when group road racing was illegal and everyone racing had to ride individually and incognito. This is why riders set off in one-minute intervals in what is known in cycling circles and somewhat intimidatingly, as ‘the race of truth’. Race timing is manual and everything about TT organisation speaks of ‘old school’. 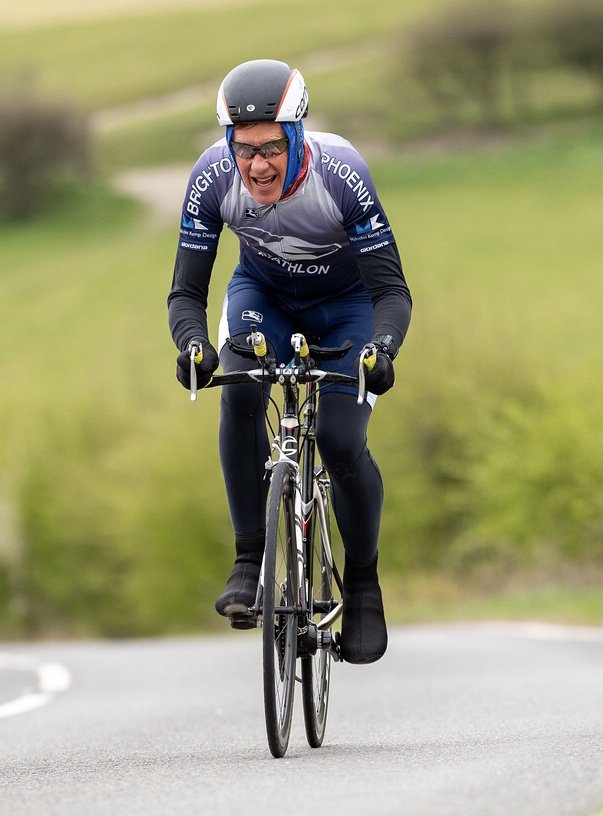 3 minutes in and looking spent already!

After cycling back up the hill from Saddlescombe Farm (that warms you up again!) before I knew it Jim, who I have now learnt was my ‘minute man’ set off...it’s very different from a mass start in a triathlon for sure but kind of exciting nonetheless! My turn…30…20…10…5,4,3,2,1 off you go…good luck! Encouraged by the starter I set off as if I had a chance of reaching my ‘minute man’, and by the time the photos were taken about 3 minutes in I looked spent…only 75 minutes more to endure! Copyright for this photo and to see others from the race see Dave Hayward Photography

The actual race was a big effort for me but great to see other Phoenix members (I spotted Erica, Liz, Gina, Lee and Cheerer-in-Chief Eogan) marshalling and supporting. Traffic was light and the course was excellently marshalled, so that you could ride, waved through, most roundabouts and turns. Finishing at the top of Saddlescombe Road is a tough end to a TT but I was just glad to get back in one piece feeling I’d given a reasonable account of myself, sneaking in under 1hr 20mins…my mini target. And I have now risen, or dropped if I’m feeling less glass half full, to the dizzy heights of 120th out of 144 on the segment! All that remained was to chat briefly about the experience with the others, go back up the hill (again!) and roll home. By the end of the day I felt like the clocks had gone back a couple of hours!

If you fancy a bit of bike race pain these events are a great way to get it, and don’t feel intimidated that there are some seriously good riders doing them…there’s a place in them for any and all of us! I will try and publicise future events.

There were 86 finishers and some amazing performances, with times ranging from just under one hour to just under 2 hours. Full results can be found here: https://resultsheet.co.uk/events/

For the record the Phoenix results (although John, Jim and Andy were riding under Brighton Mitre) were: