Hever Castle Olympic Triathlon 27/09/20: well that was quite a tough race. But at least I got to race. Every other event entered since April this year cancelled. So when this race was confirmed in July I felt I had to enter and hang the expense £125!
Not that the summer had been completely race free. Far from it. The “Real Tri” organised by Eogan McKenna and the Phoenix Virtual Multisport series had kept things ticking over.
So at 0630 Sunday morning we set off to Hever Castle. The idea was to drive the bike route before parking up. Just in case there were any surprises. It was nice to see that all the junctions where the route joined a main road there were cones to allow us to keep going and not have to stop.
In order to keep everybody safe the race organizers set up special arrangements with 15 minute time slots for up to 75 competitors depending on your start time. My wave was at 0945 so I was to arrive at the holding area at 0830 ready for 0845 entry on to the race site. And each competitor was allowed just 1 spectator. Once onto the site it was through the race licence check and on to registration. We were not assigned numbers but instead picked a race pack at random which was then linked to your unique QR code received when entering the race. This seemed to work well and was completely contact free. This all took about 10 minutes. In transition we had about 30 minutes to set up. Normally each athlete has 75 cm of space, now we had 200 cm J. So, unusually, there was room to leave your kit bag by the bike. 15 minutes before race start we were led the 500m to swim start for the race briefing.
It was a time trial style start with swimmers entering the water at 10 second intervals to comply with social distancing rules.
The lake swim was shortened from a 1500 m loop to 800m out and back because in the water it was only 12 degrees C. At least that was flat. 500m run from the lake to my bike for T1. To get out of the castle grounds the bike route used a narrow access road with speed bumps and the first 100m or so was loose gravel which was quite unnerving when riding a TT bike. The bike was 2 x 20km laps of a fairly hilly course around the High Weald, 600m of climbing. No flat bits just all up and down. Thankfully it was mostly sheltered from the blustery wind by the trees, though I was glad that I put a windproof jacket on. I have to admit that 2 laps enough for me, it was starting to hurt by the end of the 2nd lap. Coming off the tarmac and going on to loose gravel to get back into transition was quite tricky but I did stay upright. Then another 400m for T2. The 10.5 km run was around the local countryside and the castle grounds, pretty much all off road though dry under foot, a mixture of surfaces, grass, mud, gravel as well as some tarmac. We went through a show jumping ring and along the lakeside, all very scenic if you have energy to look. Still plenty of hills to deal with, 147m climbing. The last 5 km of the run even going downhill hurt now. Then there was a sign saying 500m to go and it got less painful with the end in sight. I’m not sure I could have sprinted to the line though.
Swim 14:06, T1 4:52, Bike 1:25:07, T2 3:27, Run 53:19, Total time 2:40:55.
Placed 136th overall and 12th V50.

Superstar Sam Wade doesn't get many opportunities to pull on his Phoenix vest these days, but great to see him  chalk up another outstanding  overall victory here in one of his favourite races, finishing an astonishing  13 minutes clear of second place in 1:54:24. 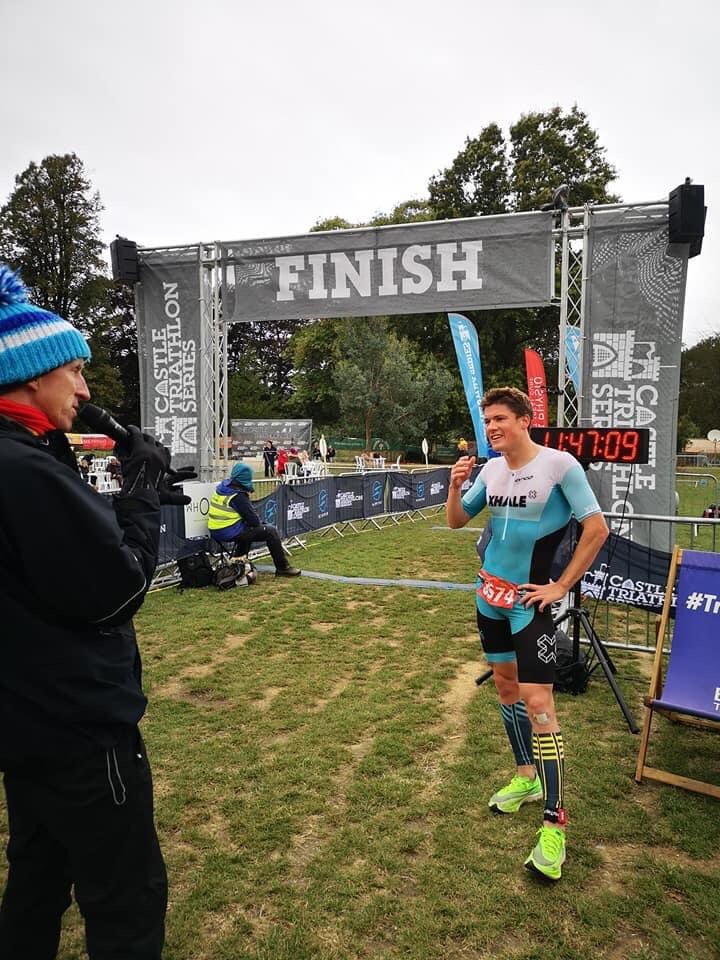