Malcolm Kemp and Andrew Haig went to run the Bienwald Half Marathon in Germany at the invitation of their running pal Clemens Hünerberg. Apart from the naff headbands with their (temporary) team name on, they fared pretty well.

The race, held in conjunction with a full marathon, was run on a dead flat metalled road winding its way through deep fir forest. The area had been snowed in the week before but on the day of the race conditions were perfect with a temperature of 10 degrees and no wind.

That night they celebrated well at a local Gasthof in the company of other athletes including the top German M60 middle distance runner and his wife Lidia Zentner who is the world W60 800M record holder. That kept them in their place!

Clemens will be visiting Brighton in April to run the Brighton Marathon for the second time. Malcolm will also be running and Andrew will join them at the half way point to show them the way home. 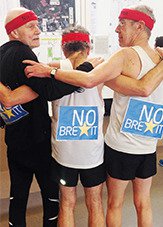