I like a challenge. For a while it was to complete an ironman (and then another, and then another...). Some I've been successful at (complete the Dart 10km swim; swim round Brownsea Island without a wetsuit) and others less so (get that darn marathon time under 4 hours 30!). The ones I'm most suited to seem to be the ones where you just keep going (365 miles of swimming in a year, anyone?) so it wasn't a surprise that I accidentally slipped into the challenge of ‘Runuary' in January 2017, and certainly not surprising when I found that morphing into the goal of running at least a KM every day for a year.

I was actually on holiday at Club La Santa for new year 2017 and had been ill with flu all holiday. On New Year's Day my friend told me about Runuary (where women sign up to support each other running every day in January) and said a few of the women there had signed up. I said I couldn't because I was ill but she persuaded me that I was on the mend and it would be a good way to get back to running. She pointed out it was sunny, I had a running track on my door-step and that it would pull the holiday back from total disaster, sports-wise. I couldn't really argue, although I was still a bit ill and it took a couple of weeks for me to do much in the way of distance.

At the end of January I realized I was lacking a goal for the year. My husband had signed up for Ironman Sweden and I was looking forward to being the main supporter for this but I was missing a little something myself. I had Brighton Marathon coming up, but once that was over I was worried I would start to feel resentful that I wasn't also entered for Sweden - although I knew that wasn't feasible in terms of our family life. That's when the idea of running for the whole year occurred to me. The decider was when I got half way through February and calculated that day 100 would be the day AFTER Brighton marathon. That was a challenge I couldn't resist!

There were only about ten days in the year when it was really hard, and there were probably about half a dozen when I shouldn't really have run (most of them in the last three weeks of 2017 when I was battling a virus). I took my daily run right down to a really really slow jog as a result. In fact most observers probably thought I was walking! It was physically so hard. The other challenging times were when I had to squeeze a run around a really busy day: for example, running after a day driving from Germany to Sweden for the Ironman; running after a gruelling two-day job interview on the morning of my sister's wedding, and running at 5am on the track at Club La Santa (on a better visit in October!) before packing mine and my kids' suitcases and racing to the airport to fly home. But all of these gave me a great sense of achievement and a huge energy boost when I needed it.

Running following my two marathons (after a disastrous performance at Brighton I obviously entered another one) was actually easier than I'd expected, but running after travelling to London for a 5km swim event was pretty tiring, especially as I had to squeeze it in before going to the Phoenix awards night!

On one day in January I remember going out in my pyjamas, coat and wellies to walk the dog because I wasn't feeling the running vibe, and then thought, ‘What the hell!' and ran a kilometre like that. I had to hold my hands over my boobs as I wasn't wearing a running bra! It was then I realised I'd probably been making too much fuss about the effort required in ‘going for a run' in the past.

The biggest surprise was that I didn't get injured. I think I learned to listen to my body in new ways. I adjusted my route, the distance and the time of day to reduce grumbles from my calves and my hips (both of which have been problematic in the past). I was also surprised to get a 5km PB this year. I was marathon training but I think the discipline of the daily run helped me keep my speed up.

My husband thought I would get injured and when I was ill at the end of the year he was convinced I'd make myself seriously ill. To counter that, I did cut out other things I might have wanted to do as well, like swimming, or cycling my new bike!

The best thing about it has been all the amazing sunrises and sunsets I've seen. The experience of the changing seasons, the light, the weather, the world around me, has been a special gift which I'll never forget. This challenge has made me a better runner than I've been for years, and it's changed my relationship with running. I'll never think I'm too busy to go for a run again!

Update:
At the time of writing I've just completed my 425thconsecutive day's running. In the snow. I'm not really sure now what it will take to stop me...

Thank you Hildi Mitchell for this report 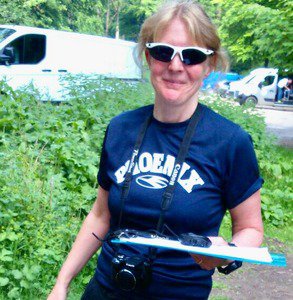