After nearly 20 years of Tri-ing I decided that I would try a few different things this year. I do not usually like hilly races so I decided to enter one, train hard and see if I could make it round!

I had taken up a Club Brighton Marathon place this year as my first big city marathon (having previously done them off road and at the end of Ironman triathlons). I then managed to trip over a paving stone two days after the race and damage my right hip. Not quite what I had planned for. This rather limited not only my running but hard efforts on the bike too.

I managed a half distance race in the New Forestin Mayand came second in my age group, actually catching the winner on the run despite the slowest half marathon I had ever “run”.

I therefore arrived in Heilbronn, south-west Germany, rather underprepared. A lovely town in the middle of the red wine producingarea, not much English was spoken but my German was enough to get us by. Our hotel was around 400 metres from transition and the swim start with the swim in the River Neckar, the bike section going through the vineyards and the run through the town. Chatting to top British Pro Joe Skipper at breakfast he informed me the bike was a real “hard mans” bike. Oops.

Race day dawned fine and the swim went well although some people were unable to swim straight despite having the river banks to guide them.A long run to transitionup steps, over tram lines andslippery white lines followed.Waves featured mixed abilities to spread out the competitors on the bike course which went along narrow country lanes, through twistingturning quaintvillages and uphill and down dale with practically no flat to be seen, a very technical course.An out and back section, pretty hilly in itself, led to a two lap killer loop. Ninety degree turns at the bottom of steep hills led immediately to 12%uphills so whilst the views were spectacular there was never a moments rest during which to appreciate them.The temperature was rising on the second lap which made the hills seem even harder. On the return to town we were encountering the standard race competitors, some of whom had ignored the race briefing to be careful on the descents and corners. One person had overcooked a corner and taken out several of the returning long distance racers who were strewn over the side of the road! There was a brief hold up whilst ambulances ferried people to the waiting air ambulance then I was off again.

Returning to transition after an over distance bikeit was now 92 degrees and climbing. The run went partly along the river bank which had some shade but through the town the concrete made it seem like a furnace. I started at a conservative pace which I was able to maintain despite the increasing heat, tired legs and aching hip. The volunteers and townsfolk were brilliant and kept us all going.

Finally the last lap was ticked off and I entered the town square for the last time to generous applause and energetic cheerleaders. Whilst my time was slow I managed to get on the podium with third place, once again I had been catching theCanadianlady in front on the run but ran out of time. Whilst there were no trophies forthcoming I did receive from the Mayor some pool toys and best of all a large bottle of the local sparkling wine!

In conclusion it was a very well run event and well worth the trip. Whilst my time was not what I had hoped for at the start of the year I was pleased to have finished on the podium and will take away a number of lessons for future races.Many thanks to Keith for his usual brilliant support.

Thanks Debs Evers for this report & pictures 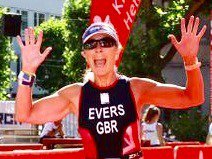 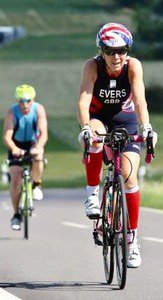 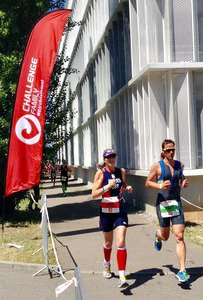 « Shoot the Vs and drop like a stone! Going Long »