Thursday saw intrepid Phoenix runners take on the 'Shoot the Vs and drop like a stone' run at Plumpton.

Starting with a 'gentle' climb from Plumpton up, up, up to the top of the downs, there was then a timed descent followed by a very scenic run back to the start.
The course was a bit slippery in places due to heavy rain in the day and despite the race brief there was no mention of sticking to the left path (!!) but a lovely evening with fine views was enjoyed.

The results:
John 4:24
Amelia 4:36
Andrew N 4:49
Liz 5:01
Donald 6:16 - took the wrong route so ran back up and did it again in about 3:55
Kathryn 6:43 - also took the wrong route and emerged from the brambles behind our sweeper Malcolm, much to his surprise. Kathryn sensibly decided not to run back up the hill to have another go.

Donald says ""I ran my 2nd attempt at a sensible pace mainly due to fatigue, so i'm confident I could shave some off that time (assuming I go the correct way!) Well done to Amelia for her Strava record"

A huge thanks to Liz, Sue and Erica for making it all happen! Same place next year.... 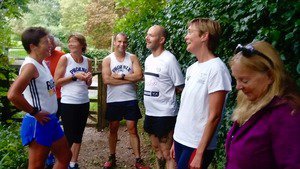