Sad news came to the club recently. Maurice D’Arienzo, truly one of the club’s Founding Fathers passed away suddenly. We all know the story of how Matt Paterson and Steve Ovett formed Phoenix back in 1981. They lit the fire but without a couple of key families rolling up their sleaves and commiting to Phoenix the club would not have succeeded. Key amongst those familes where the D’Arienzo’s. Maurice and Sylvia were such a warm and welcoming couple with three children, Susanna, Ronnie and Simonetta. I for one will never forget how they welcomed me into the club when I arrived in Brighton as a young art student.

Italian born Maurice had a glint in his eye and a smile on his face that made any time with him fun and memorable. He became the second Chairman of Phoenix and he even made board meetings fun. He will be sorely missed by all who knew him.

Upon hearing the news about Maurice Steve Ovett has sent this message.

“I’ll always remember Maurice as someone who always had a smile on his face and laughter even when Ronnie had a bad race !

He loved sport and his family, and when they combined you could see in his eyes he was at his happiest.

Another thing I remember was he was very light on his feet !!

Almost silent as he jogged around, we just got him too late in Phoenix I think he had the making of a challenger to Paterson !

I always think that in the passing of someone we should look back and see if they enjoyed their brief stay here with us, in my mind Maurice certainly did and because of this will be missed by us all.”

Now you may well wonder why this obituary has the title it does. It relates to an event that has become somewhat legendary. In the early days of Phoenix we were not considered a serious track club. Why would you be if you were founded by the Olympic 800m champion and your club 1500m and Mile records were world records? Yes you can see why we were all puzzled by this attitude! The Sussex Track and Field championships used to hold a 4x 400m championship as the last event. One year Phoenix decided to put out a pretty good team. Upon arriving at the old Crawley stadium the Phoenix clan were greated with some disdain. A rival team approached them and said “Why are you bothering to put out at team you’re just a cross country club.” Emotions were high and the race was close but the Phoenix team of Mark Rowland, Steve Ovett, Dave Agnew and Ronnie D’Arienzo triumphed crossing the line in a new Championship record. Maurice promptly marched over to the rival team and called up to them “Hey! Who’s a Cross Country Club Now?!” As I said emotions were high and people had to be restrained as a fight almost broke out. But Maurice knew that he had to say what he said because our club had to be taken seriously if we stood any chance of thriving. Maurice stepped up to the mark for Phoenix in so many ways. He was not only a Chairman but also a coach, a team manager, a Father and a life long supporter. He will be missed.

Maurice is survived by Ronnie and Simonetta and they have asked us to share the notice below.

Please help us celebrate Dad’s life. The funeral service at is on Tuesday 21 March at 1pm in the North Chapel at Woodvale Crematorium, followed by a 2:15 burial at the Lawn Memorial Cemetery (Warren Road). Friends and family are also invited to a gathering afterwards.

If you wish, flowers would be lovely or a donation to the Sussex Wildlife Trust where Dad volunteered would be appreciated.

We are bound to have missed friends, so please pass on the invite to all that would like to attend. 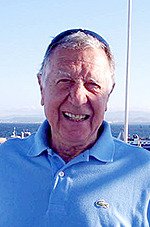