The Sussex Grand Prix season started with the Eastbourne half and saw a good turn out from Phoenix. Read on for Alex Bonzi's report....

" With no mention of any further named weather phenomena to follow on the heels of storm Ewan, entrants to the Eastbourne half marathon would have been forgiven to have thought surely, surely, conditions were not going to be as bad as they were for Brighton's?!?! I don't know if this might have angered the weather gods but, as it happened, it was very much the case of ‘better the devil (storm) you know' as strong winds and squally rain welcomed the roughly 1500 plucky runners for the, oh-so-civilised, 10 am start.
At least, the relatively mild temperatures provided those so inclined with a crumb of comfort. These were the thoughts going through my mind together with reminding myself of the training I had done as I was trying to keep warm while waiting for the start in a muddy Princes Park located at the east end of the seafront.

Finally 10 o'clock struck ( actually...we were held for a few tens of seconds longer- how ironic and cruel!) and we set off westward along the esplanade. As we settled in our pace past the seafront sights, the Pier, the Grand Hotel a meowing, leather-clad, whip-cracking cat woman (!?!?), the incline started to become noticeable under our feet: the feeling received its visual confirmation as soon as the course turned away from the coast where the climb up Warren hill begun in earnest. Climbing was testing: the climb long and the gradient demanding but at least away from the wind! Even this early in the race ( miles 3 and 4) I was glad I did not go out too hard at the start or else, I am sure, I would have been made to pay dearly. After a sharp turn at the top ( which in my estimation was at the same height as the not so distant Beachy Head) we were released to what felt like after the struggles of the climb, hurtle headlong along sweeping hairpin bends as the course wound its way back to the seafront.

Once on the seafront we quickly descended at sea level along the promenade: finally with the wind at our backs we got down to the serious business of notching off the miles! 5,6,7,8 came and went. By now even the sun was timidly peeking out from the clouds! Eventually we arrived at the harbour at the opposite end of the seafront. Here the course became really technical: it twisted its way past residential estates, over bridges, along gravely paths. What it lacked in speed it certainly made in variety!!

As we eventually found our way back onto the seafront for the last two miles, one would have been forgiven to allow the mind to wonder towards thoughts of finishing. For those that did, there was to be one last surprise in store: a stretch of exposed land, running directly into the wind path back to the Princes park! With the wind seemingly saving its best (worst) for this and with legs aching at every step it was a gruelling test of mental fortitude. Eventually even this came to an end and, via a couple of short zig zags we reached the finish and the well-earned medal!

There was a good Phoenix turnout especially in the women's category with 15 runners, 9 of them women (compared with 2 last year). This is particularly valuable as it qualifies as a SGP race!

The race was not one for a quick time but impeccably run, enjoyable in its variety and well supported by the locals (cat woman making an appearance was a definite bonus!!!). I will definitely consider doing it again next year but this time without giving too much credence to the weather forecast!"

Thanks again Alex for this report 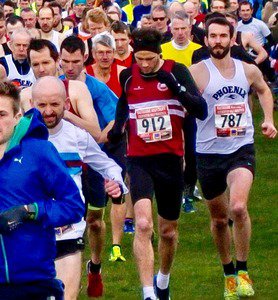 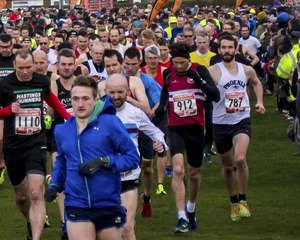