The last in the Cross Country League saw athletes battle weather and poor conditions before even starting the race!

The recent wet weather rendered the course un-runable but thanks to the work of the league officials, who made last minute changes to the course, the races went ahead. Proper winter conditions added to the excitement of the day as the first races started in snow (albeit flakes!).

Phoenix saw athletes in all 7 races and it was again the females that shone;
Well done to Madeleine Badruzaman and Ella Kaps for their 3rd & 4th respectively in the U11 girls race, Clara Muzio for finishing 4th in the U13 girls and Alice Wright who came 3rd U15 girls. Furthermore, Alice won the silver individual medal and the U15 girls finished second in the league.
In the women's race we saw Tara Bage finish 1st U20 in the race and overall in the league. Naomi Fonteyn 2nd U17 in the race and 3rd in the league and Connie Jankowski 5th U17. The Phoenix women's A team finished bronze in division 1 in their first year since promotion.
The men's race saw Billy White finish 1 st U20 and Dave Carter 8th Vet. The Phoenix men's A team also took bronze in division 1 whilst Phoenix B & C finished 1st and 2nd respectively in division 3 (giving them promotion to division 2). Well done to the Vets who finished 4th, just 3 points off 3rd position. In the individual medals there was golds for Ben Mathews (U20) & Paul Whelpton (V60) & bronze for Dave Carter (V40).

These medals were hard won as the competition as always was fierce plus turnout was a bit low for this final race. We hope those who did compete treated yourself to a well deserved hot chocolate to defrost after! 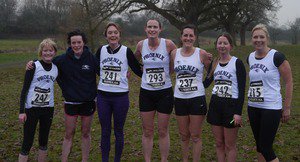