Ultra running has gained a few adherents in the club over the last few years, none more determined than Brian Friend. His team mates in the South Downs Way relay at the beginning of June found that hard enough but for Brian it was just a light-weight training session leading up to this, the real challenge. The annual individual 'Centurian' 100M event attracts its full complement of 200 runners with roughly two thirds completing the task. Starting over in Winchester at 6am on the Saturday, Brian was hoping to be not too far over the 20 hour mark. In fact he finished in an impressive 21:43:47 and in 14th place.

We caught up with him at Devils Dyke after 13 hours of running and as you can see from the photographs he was still all smiles. He had been paced through some of this section by Elana Moore and Matt Plass as well as his young nephew Tom Jupp. Later that night he was met by Tom Farsides who paced him through the last 21 miles, running by head torch. (Tom got just a couple of hours rest at home before heading off to the Bewl 15M where he ran a fine pb!) 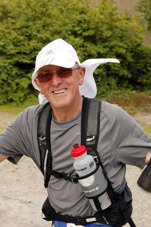 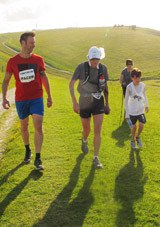 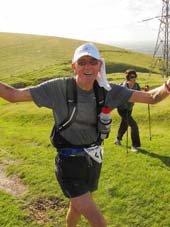