With the London 2012 Olympics just around the corner it was the turn of Phoenix finest middle distance runners to fly the flag at the British trials.

Star performance of the weekend has to go to Dan Stepney (800m) going into his heat he was ranked the slowest on paper however with some gritty running he put in a seasons best 1.50.88 to make the final and put out some big names amongst them Darren St. Clair (1.45) and Chris Gowell (1.46). In the final Dan was up against one of the finest line ups Britain has seen in many years with three of the athletes having the 800m A standard for the Olympics. Dan produced another strong performance finishing 7th again in 1.50.88. Also racing and making his final appearance in a track race before retirement was former national 800m champion Tim Bayley, Tim however was not at his best finishing 5th in his heat, he will now be putting his wealth of athletics knowledge to good use coaching and bring up the next generation of athletes.

Charlie Grice at just 18 was going to find it tough to reach the final of the 1500m being drawn in the same heat as current World Champion Mo Farah. However kicking home hard in the final 100m off a slow pace he came in just a second behind Mo in 2nd place (3.48.13). The final was to be as completive as the 800m with Olympic A standard runners Andy Baddeley Ross Murray looking to book their place at London. The hard run against Mo in the heat must have taken its toll as Charlie finished down the felid in 8th although at 18 and the youngest in the final by some way he will take the positives from his run. 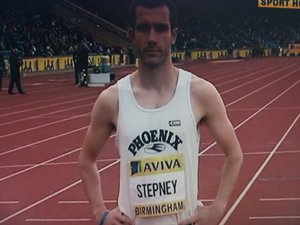 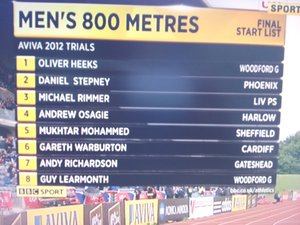 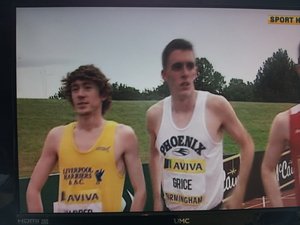 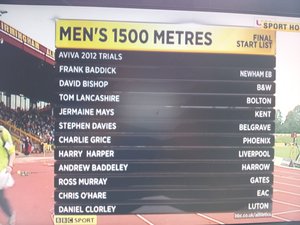