It was proper x-country weather for the final Sussex Cross Country League race at Lancing Manor on Saturday, cold wet and windy. Numbers were down, not only for Phoenix but for all clubs, probably the result of a packed fixture list in January, half term and the Brighton Half Marathon on Sunday.

As always the races started with the U13 girls. Phoenix were represented by Charlotte Mathews(16th) and Claudia Betts(22th). This was the first time the girls hadn’t managed to field a full team but despite this the team finished a very good 5th overall in the final league table. A special mention should go to Charlotte who ran in all four races, with Elorah and Claudia running in three.

A report on the U13 boys has been provided by Quenton Davis......... We went into the final league match at Lancing in gold medal position but on only 5 pts ahead of a strong Hastings team, who had closed the gap in the last match at Bexhill. With 4 potential A team runners absent, holding on to top spot was never going to be easy but as with last season the boys demonstrated the depth of quality in our squad at this level and still managed to field two full scoring teams. Archie Davis came home in 1st place ensuring him the individual gold and in saving their best performances for the last race, Harry Bartley (7th) and Ollie Johnson (12th) ensured the gold medal spot by a slim 2pts from Hastings. The A team were backed up well by Sam Betts (21st), Joe Kelly (22nd) and Jack Etherton (29th), all running in their first season at this level and demonstrating how important it is to team spirit to hit that start line on mass, something the U13 boys have continued to do for the past two seasons and why they made a clean sweep of all the cross country gold medals at county level this season . Well done to everyone involved.... athletes, coaches and parents.

In the U15 girls race there were no Phoenix runners. A special mention though to Jody Mann who ran in all the other three league races.

Billy White once again dominated the U15 boys race securing another win, with another fine effort by Will Russell in 27th. With Billy winning the three races he ran he also secured the individual gold medal. With Will Russell and Sam Kitchen both also running three races each the team finished in 7th place in the final league table.

William Thompson was the only Phoenix runner in the U17 boys race finishing in 6th place. Despite a lack of runners on the day the teams previous performances resulted in the team securing the bronze medals in the final league table.

Several of the ladies runners were away or running the half marathon, however Phoenix still managed to field five runners. Unfortunately although Catherine Bounds was in contention for the individual gold medal she could not run, however Erica Martin made up for her absence with a fine run finishing as first senior lady. She was followed by Lizzie Durman who is regaining her fitness and finished as 4th senior, Katheryne Harnett 10th senior, Liz Haliday 16th veteran and Emma Hughes 13th senior. The team finished third on the day and third in the Div2 league, just missing out on promotion to Div1. A special mention for Paule Kremer who did not run on the day but finished 4th in the final league table.

The men’s team were down on numbers but Max Pickard made up for this with a magnificent run to finish a clear first. Max followed James Baker until the start of the final lap where he broke away to finish 36 seconds clear. Max was followed by James Miles 24th, Nigel Herron 37th and Andrew Haig 79th. Despite being down on numbers enough points were gained by the senior men to finish in 6th place in the final league table securing their place in Div1.

Well done to all those athletes who have worn the Phoenix vest and competed in the x-country league races and a thank you to all the coaches, parents and partners who have supported the athletes. Although it was good to see Phoenix athletes win individual and team medals it was just as pleasing to see the club well represented in most of the races with a total of 62 different athletes competing over the 4 races. 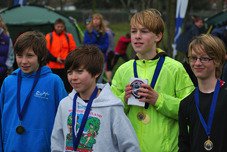 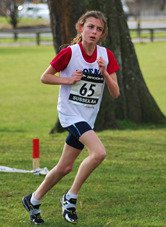 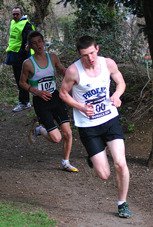 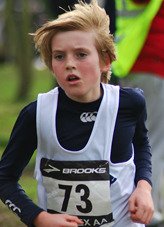 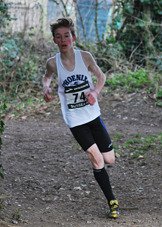 « South of England XC champs, Tick Tick BOOM! How long is a half marathon, anyway? »