Charlie making his English Cross Country debut had a great run to come home 4th in an international standard meet. On what could be described as his least favourite of courses, thick mud and plenty of climbing and descending Charlie took his time to move through the pack while others cracked under the treturous nature of the course, finally using his powerful kick to secure 4th right at the death.

Report from Charlie below

I travelled to Brussels with the England team last weekend to take part in the Lotto Cross Cup which is a series of races in the Netherlands/Belgium. England athletics took Junior and Senior teams to this race (4 in each category). I was really looking forward to this race after a couple of tough weeks at college! It was my first race for England over cross country and it shows how much I have improved over the last year. We travelled out on Saturday morning from St Pancras by Eurostar which was very efficient dropping us off at Brussels and then taking a couple of tube stations to the very nice hotel we were staying in, right in the middle of the city. The race was on Sunday and we were returning on Monday morning so it was a very short trip!

When it came to race day I knew that Brussels is notoriously muddy and cold! Last year it snowed and it was snowing before my race although luckily it did not settle. I was in the Junior Men’s race, running with boys that could potentially be 19 years old. The race was 6km and extremely muddy! I was literally covered from head to toe and I even had it all over my face! Unlike any cross country races in the UK, the loops were 1km long! We had 6 laps to do which got a bit tedious but I didn’t mind it because I am a 1500m runner it feels quite quick and I can split the race up in my head quite nicely. There was also a bell for the signal of the last lap which was pretty cool as that only happens in track races! The race was tough, with a couple of hills. I started off in 9th place and worked my way through pacing myself nicely and moving through to 6th. I then overtook a couple of people up the last hill before striding out downhill to get 4th place. I came 2nd for the England team which was above where I was expected to come so I was pleased. It was nice to be in the England team as so much of this sport is individual and the other 3 guys that were in my team we all knew each other and had a good camaraderie for each other. 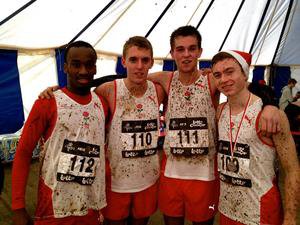