Phoenix raises £600 for the City's Homeless

Phoenix recently presented a cheque for £600 to The Clock Tower Sanctuary to support its work with young people aged 16-25 who are homeless or insecurely housed. The cheque represents funds raised by Phoenix’s first ever 10K seafront race.

The race, which took place in July, is the city’s only summer evening race and looks set to become a regular fixture in the road-race calendar. This year 450 participants signed-up for the race, opting to make a donation to the Sanctuary - the race’s charity partner, instead of receiving a medal.

Phoenix’s Paul Collicutt and rising star Charlie Grice (Junior International and Youth Olympic bronze Medallist) presented the cheque for £600 to the Sanctuary’s Sean Gibson at the end of October at Withdean Stadium. Paul said: “The 10K was exceptionally successful with superb conditions, excellent organisation and some really fast course times. We’re delighted that we’ve had an opportunity to support the valuable work of The Clock Tower Sanctuary and look forward to working with them again next year.”

Phoenix have received the go-ahead to stage the race again next year on Wednesday 18th July 2012 with up to 600. Registrations will open early in the new year. 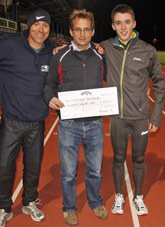