Phoenix in Brussels (A Winter's Tale)

The club outing to Brussels on the weekend of 18-20 December was a great success, not just for the Phoenix athletes but also for the friends from Hastings, Crawley and Brighton and Hove who travelled with us. Those of you keeping an eye on the weather may be surprised to hear that we got there and back with relative ease, apart from a small group who missed the scheduled return Eurostar train. (No names, no pack drill)

We arrived just four hours late on Saturday evening, to find that Chairman Paul had managed to book us into four star luxury in the middle of town. Time for a quick meal and just the one glass of beer before an early night (we are athletes after all).

The format for Sunday is that the Iris Lotto CrossCup, an IAAF Permit meeting takes place throughout the day with races for all age groups run on a 1KM course. At 12:30 there is also a two lap 5K/10k event involving 1200+ runners. Both courses were effected by compacted and falling snow and, in the circumstances, everyone ran exceptionally well. These races feature high quality European fields and we fitted right in. In fact, there are a few people who've put themselves in line for England consideration. We were especially pleased to have Tim Bayley AND Priscilla Bayley running for us.

Kicking off for Phoenix were Billy White and Robbie Fitzgibbon running in the Cadets Garcons category (2,500m). Both were in fine form with Billy coming 8th in 8:52 and Robbie 11th in 9:03.

All eyes were then on the junior men (6000m) with the performance of the day coming from Hasting's Adam Clarke. He came third in a time of 19:38 beating most of the runners selected for England. Next up was our own Finn McNally in imperious form for a 20:15 9th placing. His was the best Phoenix run of the day. Having come back from dropping out in Liverpool he rebuilt himself to finish just behind the England team. He was followed in quick succession by Charlie Grice 14th 20:33, James McCarthy (B&H) 16th 20:49 and Max Pickard 20th 20:59. Jonas Wieneke running for his German club was 26th in 22:14.

The senior men's race was won by nine-times European Cross-Country champion Sergiy Lebid (31:27) with just 3 seconds covering the first three finishers on the 10,500m course. For Phoenix Tim Bayley was our lead runner 39th in 34:33 with Josh Guilmant coming 49th in 35:27.

While all this was happening, the mass participation 10K and 5K races were taking place around outskirts of the park. Unfortunately we were unable to find our numbers and microchips so we won't appear in the results but they would have read something like this:

We can't quite locate the 5K results yet but Liz Durman ran an excellent 20+ (second woman), and Priscilla Bayley ran 22+.

Throughout we had great support from the other members of our party especially the Pickards, the Grices, the Fitzgibbons, Sarah Davey and Josh's girlfriend Elin who had lived in Brussels for several years and was able to help out with local knowledge.

That night, athletic circumspection was off and a good time was had by all. The town was looking fantastic with Christmas lights reflecting in the snow and the streets thronged with people. The night's celebration didn't stop a group of younger athletes taking a run on the final morning. Most of those who made the first train back were then upgraded to a first class compartment complete with lunch and a free bottle of wine. Travel chaos – what travel chaos?

Finally a big thank you to Chairman Paul, who organised the whole thing. What with the disrupted travel and the missing numbers, he had his work cut out and even had to miss out on his own race as did Robin Fitzgibbon as he helped to sort out the numbers fiasco.

The trip was a huge success and almost certain to be repeated next year – so watch this space. 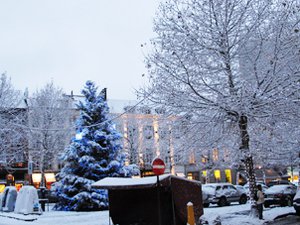