There were twelve races in all, with juniors competing on a variety of increasing distances and seniors given a choice between the Friday Ad sponsored one mile race, and a four lap 5 mile course.

This was the first year both men and woman took on a new 5 mile route. There wasa noticeable, but not deadly incline each lap,followed bya steady downhill section to prepare them for the next.

Finn McNally made yet another fantastic performance, coming second in the 5-mile race in 25.40, beaten only by Jon Pepper of Enfield and Haringey.

The women's results were somewhat dominated by Arena 80 ladies, led by Caroline Hoyte in a competitive 28.07. The first Phoenix female to cross the line was Liz Halliday, followed by Gina McGeever who completed her race just half a minute after our leading lady.

The battle for first place between John Marinko and Nigel Herronin the one mile race provided much exitement, with John crossing the line just three seconds before Nigel, in 5.30.

Phoenix juniors put on a great show, takingtop positions in the races despite some tough competition with Samual Betts winning the under 11s boys race.

Teenagers from all the local clubs,it seemed, had alternative plans on a wet and windy Saturday, and there were fewer runners in the under 15s and under 17s races.

The races could not have gone ahead without dedicated leadership from Andy Bone, who was busy organising willing helpers at 8am. Registration leader, Jackie Tucknott and marshal-marshaler Paul Caldicott also made a huge contribution, as well as marshalls Mariette Jackson, Suzanne Romney, Andrew Seivewright, Jane Edmands, Liz Haliday, Dave Howe and Phil Savage.

Race officials from Sussex CAA also helped the day run smoothly, whilst sponsorship from Geneva Investment Group, Saucony, Friday-Ad and the newly opened Sweatshop enabled it to run at all.

Once again, a successful event organised by our club membersand a great opportunity for intermingling within the local running community.

Thanks to SussexSport Photography for the use of the images here. For your own momento of the day, click the link below. 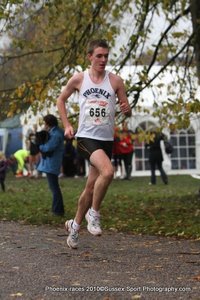