Phoenix at the British Triathlon Awards

Lizzy Brama was honoured for her achievements havingranked third in the country after a string of good results in Olympic distance races in 2010.

She said: "After racing the Ironman World Championships in Hawaii I fancied a bit of a change."

The 'bit of a change' seems to have paid off, and she said: "To come away with third place is amazing, and I'm really pleased with this result."

World Paratriathlete Champion, Faye McClelland was nominated for both the 'Paratriathlete of the Year' award and the 'Peter Holmes' award which honours inspirational performances in international competition.

Faye was the only female on an exclusive list of six athletes, which included World Champion Alistair Brownlee, who eventually took the award.

Faye said: "I'm so pleased with how my season has gone, so to be invited to the awards, and receive two nominations has made the year even better. Both athletes that won the awards were absolutely inspirationaland thoroughly deserved them."

The evening gave our star athletes a chance to step back and recognise their achievements. Lizzy said: "It's always nice to get recognition for all the hard work that we put in. It was a great evening, and a good chance to catch up with everyone out of the competitive environment."

Faye said, very simply: "Triathlon is such an amazing sport, and I love being part of it." 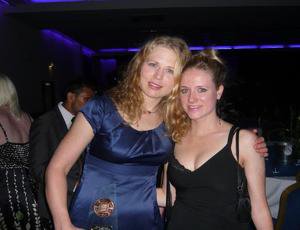