After a journey of 2 years I finally managed to complete the Outlaw Triathlon. 2019 the bike got cancelled due to the course flooding after a torrential downpour just as the race began and last year Covid.

So November last year the training started again just hoping that the race would go ahead this time.

Fast forward to 02:15 on Sunday 25 July. The alarm goes and it's RACE DAY. Breakfast is orange juice, scrambled eggs, bananas, melon and coffee. We arrive at National Watersports Center, Holme Pierrepont and it's still dark. Bike racking had been done the previous day along with putting the race kit in our 2 numbered bags, one for bike kit, which was hanging in the swim/bike marquee, and one for the running kit, hanging in the bike/run marquee. 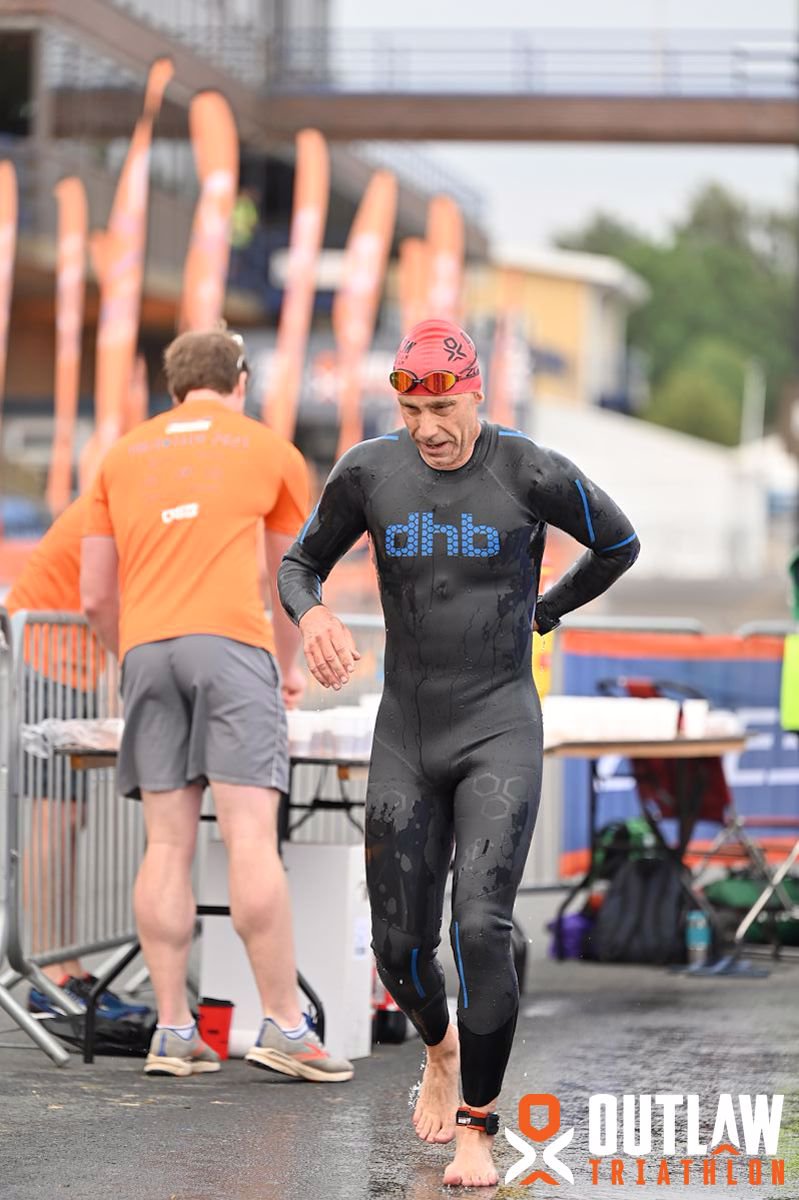 Somehow I still managed to spend the best part of an hour in transition double checking the kit bags and putting water bottles on my bike along with the 12 gels that had been poured into two race belt drink bottles. The forecast rain was not happening now so the shell jacket was removed. It's worth pointing out that transition was about 700m long with the one marquee at each end.

At around 5:30 I had a couple of gels and some water then donned my wetsuit.

There was no mass start, instead we were taken in groups of 200 down to the start where we were sent off 1's and 2's from three pontoons crossing a timing mat to start your time.

At 06:04 I dive into the water and my race begins. The 3800m course was a lap of the rowing lake. I got into easy swimming rhythm and was soon passing other swimmers. 1 hour 9 minutes later I was out of the water and entering transition for the first time.

A different style of transition than I am used to with none of the kit with the bike but in a bag. So I just tipped it all on to the ground, got the wetsuit off, socks, shoes and helmet on, take an energy gel, wetsuit in the bag, which went back on it's hook, and put my cycle top on as I jog to my bike. At this point I realized I need a pee so had to make a stop at the loos by the transition exit. That's how to spend 8 minutes in transition. 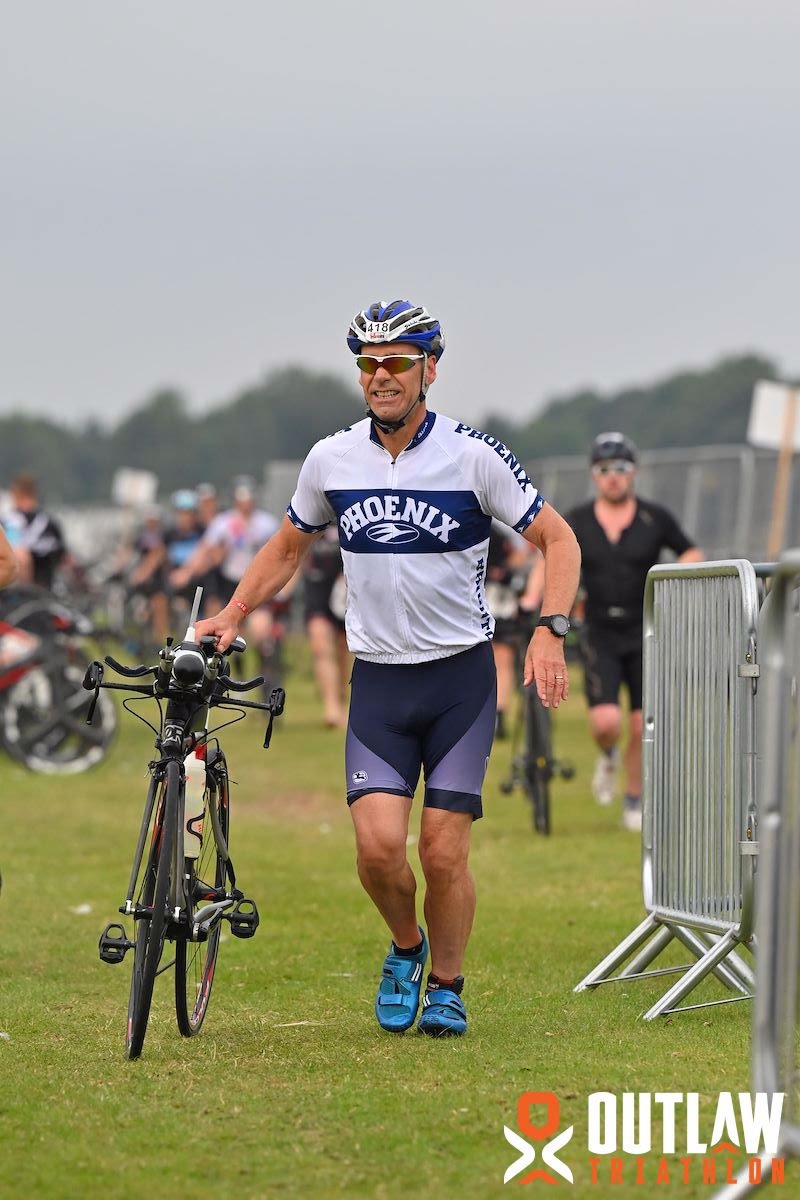 On to the 180 km bike course, which was out to 2 loops, where we did a southern loop, a northern loop and then the southern loop again before coming back. I managed to keep the effort level nice and easy for most of the time, not working the gradients. Apart from one steep hill at about 80km where the heart rate got up a bit. One chap ahead of me got his gearing wrong and almost fell off. There were several aid stations two of which I topped up with water and had to pee again at about halfway. The road surface for quite a lot of the course was not good, fairly typical for country lanes, then in the last kilometer or so speed bumps and gravel too. Back into transition after 6 hours 20 minutes on the bike feeling not too bad. 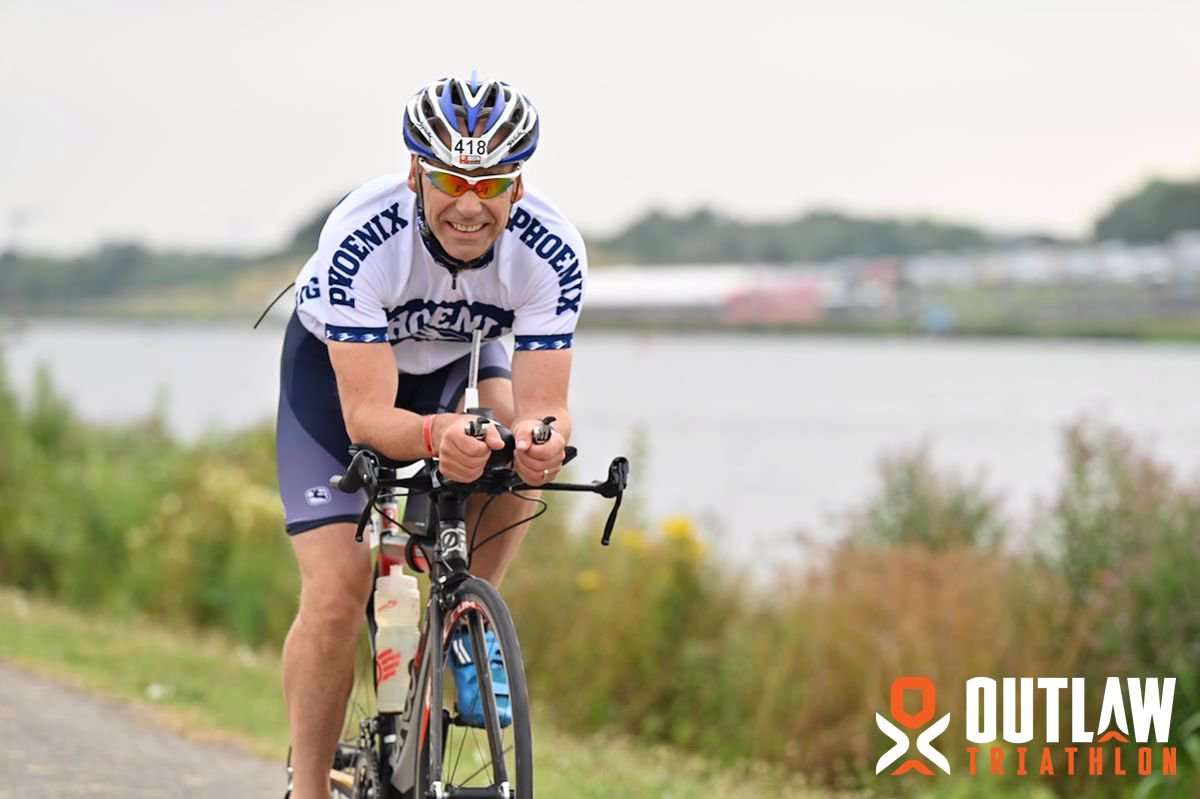 Smiling (or is it grimacing) during the 180k bike loop...

9 minutes for transition 2 including another toilet break then out on the run. A marathon.

Up until this point my pacing had been exactly as planned. This was the point where I lost control or concentration and set off too fast. I kept being dragged along by others. Even though I realized what was going on I was feeling ok and got swept along anyway. The inevitable happened at around 25km, I had been walking through each of the aid stations to drink and fuel, after this station I could only walk/jog. My pace slowed to a walk for some time and I started to feel a bit unsteady on my feet, my hands and arms were tingling and I was feeling a little cold. Fortunately I managed to keep going and eventually the feeling passed and I started to speed up. For the final 4 or 5 km I was mostly running. 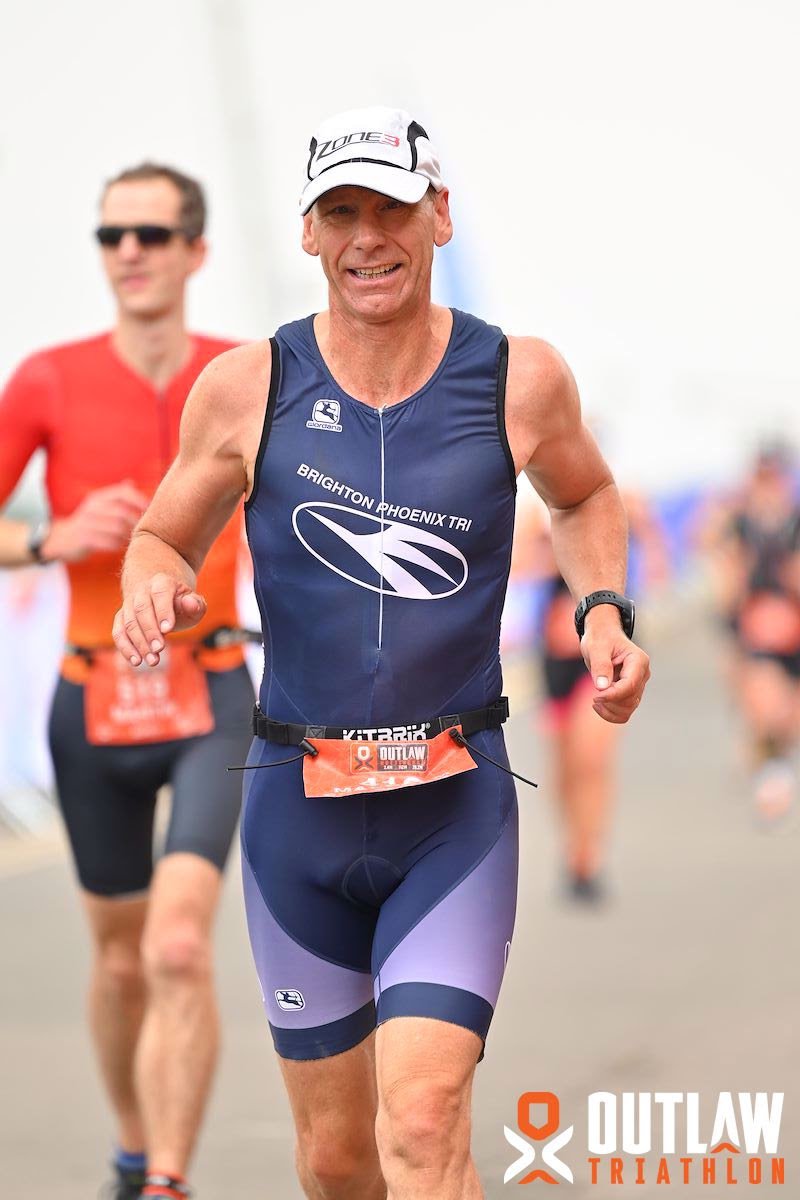 After a 5 hour 10 minute run the finishing funnel was amazing. High fiving the spectators, even giving Pauline, my wife, a kiss. The joy of crossing the finish line and becoming an Outlaw. Total time 12 hours 57 minutes. Overall position 536/1052 and 5/24 in 60-64 age group.

On the walk to pick up my bike from transition after the race my legs seized up completely. I was stood in a semi crouch unable to move until Pauline came along for me to lean on.

For the next couple of days I felt a bit tired and stairs were a challenge. Getting back to normal now and will be light training next week.

« Phoenix at the Olympics Goodwood Relays - Cross-Country is Back! »