For the past few years I’ve been intrigued by swimrun, a fairly recent type of multisport event that involves both… can you guess… swimming and running.  It’s different from an aquathlon where you swim once and run once, because swimruns tend to include multiple swims and runs within the event.  I’ve always been put off because the events tend to be a long way away, they tend to be ultra distances, because they involve special kit, and because traditionally you swimrun tethered to a partner for the whole distance.

This year though, I got an opportunity when I discovered that a swimrun was taking place around the Thames in Oxfordshire, on the weekend when I was due to be camping about 400 yards from the starting point.  Not just that but it didn’t seem too long (16km total) and could be done as a solo effort.  Just as I was deciding whether to enter I then discovered that a swimrun was also being organised at Bewl Water the week before: also solo; also reasonably short (10km – there was also a shorter and longer option).  So I ended up entering both, thinking of Bewl as a practice run before the main event.

I mentioned the kit above. I’m well enough kitted out for open water swimming but swimruns come with a catch. Unlike triathlon or aquathlon there is no “transition” because there are multiple swims and runs around a long looped course – you don’t change in and out of your running and swimming gear, you just crack on wearing the same clothes in both disciplines.  So it turns out you need a wetsuit that isn’t going to cook you alive on the run, and you need shoes that will drain water and that won’t make you sink. 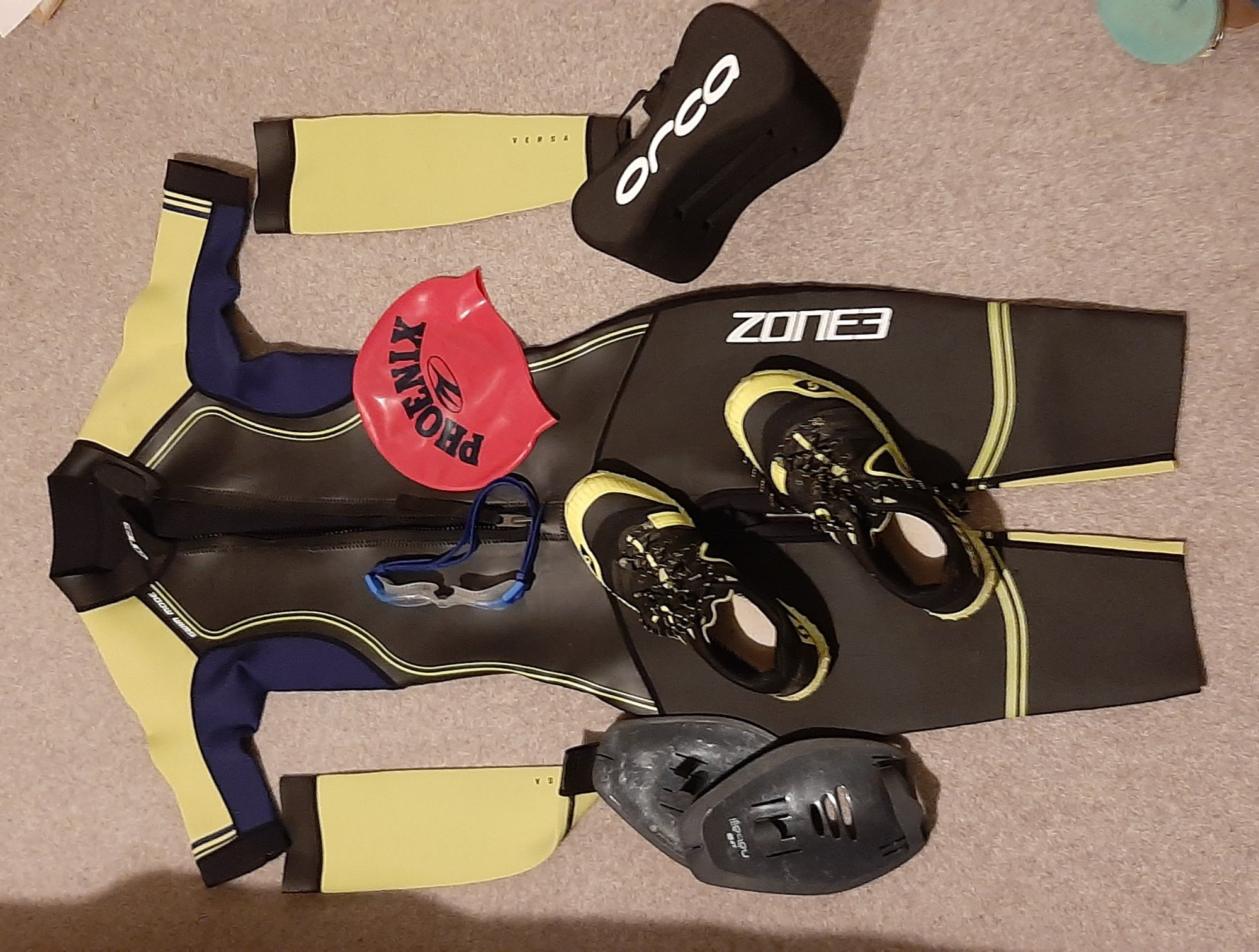 The array of kit needed for swimrun events

Of course, kit companies have found a way of developing swimrun wetsuits that cost hundreds of pounds but I managed to find an entry level one for about £70.  It is front-opening (so you can cool down a bit on the run), has pockets (for gels, goggles etc), and is short sleeved and legged (you can use arm warmers but I didn’t).  I decided to use my old trail shoes since the running was all off road, but I got a pull buoy to help my legs float.  Most swimrunners do this – it is legal and I suppose has the advantage that your legs get a rest from kicking during the swim.  However, to compensate for that I used hand paddles to strengthen my arm stroke (again, most swimrunners do this).  The pull buoy was strapped to my leg to avoid me having to carry it during the runs.

So, to the events.  I went up to Bewl with fellow Phoenix member Austen Hunter.  The 10km course had 13 stages – 7 runs and 6 swims.  The runs ranged from 450m to 1.8km and the swims from 250m-450m.  This meant we were getting in and out every few minutes, with a fair amount of faff (leave the goggles and hat on for the run or not? Remember to swing the pull buoy to your outer leg! Unzip/zip wetsuit?).  I also made the mistake of looking at the distances and thinking they were quite short – which was true – but then failing to think of what they added up to.  While it is true that the swim provides a respite from the run and vice versa, you’re still blowing hard by the end of each stage.  Anyway: very well run event (including being very Covid-secure), and beautiful grounds.  But when you see 10k swimrun, a good rule of thumb is take your running 10k time and at least double it!  We both finished in around 1h20.

Despite being much longer, Oxford swimrun only had 6 stages: a 1.2km swim, a 7k run (more like 8.5), a 1.6k swim, a 400m run, a 1k swim, then a final 6k run (more like 7!).  The swims were downstream in the Thames north of Oxford and the runs were on hilly trails in Wytham Woods.  I think once again I probably looked at the individual distances and thought they were manageable, but when you add the swims together it still comes to an Iron Man distance.  As was the case in Bewl, as the event went on I was getting overtaken by many others in the swim.  However, I was able to compensate in the runs.  The fact that some people were walking up the hills made it a bit more of a relaxed affair, meaning I could stop and have a proper drink at the support stations rather than attempting a marathon-style grab and run.  Just as well because even in a special wetsuit, running fast was a real struggle.  I completed the course in about 2h30 which is closer to a marathon effort, whereas I probably expected it to feel more like a half.  Like Bewl this was a well-organised event, with the staggered starts helping to make sure no competitors were in close proximity for very long.

Despite telling myself several times in both events that I really wasn’t enjoying it and that I’d probably give them a miss in the future, I suspect I will end up doing another swimrun. I can recommend the experience – perhaps the biggest appeal to me is the idea of covering a large area of ground using whatever means you have.  If you are a swimmer, think of it as a swim with a few land obstacles.  If you are a runner, think of it as a long run with some refreshing dips on the way.