Lowdown on the Downland

I’ve not really had much long-distance run experience…a couple of marathons (5 and 10 years ago) and a couple of long-distance triathlons, more recently. It’s new territory. I did a bit of reading on how to set about it and immediately started trying to increase my mileage. Part of the plan was to do a couple of shorter ultra-distance runs (which I’ve discovered is any run longer than a marathon) before doing the target race in November, 50 miles of trail just outside Madrid. 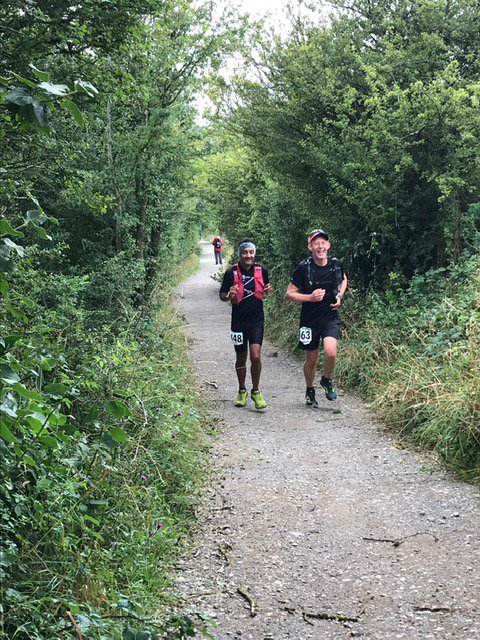 So, the first one was on 10th August the ‘Downland Challenge’. Actually, my first could be said to have been in June, as the marathon I ran with fellow Phoenix athlete Rob Bishop during his ‘5 in 5’ was measured wrong and was just over 27miles! But it was called a marathon and not an ultra, so I guess it doesn’t count! The Downland Challenge was only marginally longer, just under 28 miles, but as a run couldn’t have been more different than a flat up and down the river Adur on a balmy Thursday evening…it felt twice as long! 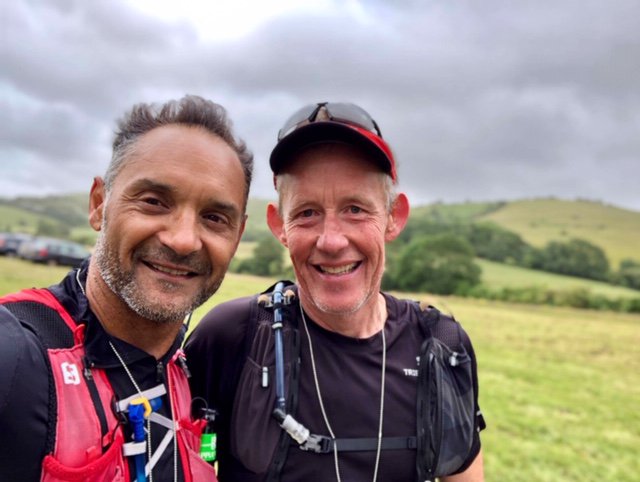 The experience of an ultra trail run is very different to any other event I have done. Small numbers of hardy souls, all very low key but lots of camaraderie and mutual support and encouragement. I was running with my friend Ian who is a bit more of an old hand at this type of thing. I felt confident in his company, especially as he was less than 100% fit so I reckoned I ought to be able to keep up without trashing myself!

The start (and finish) was on Underhill Lane, not far from Ditchling Beacon and kicked off with a steep climb up to the top of the downs…I’d decided I was walking up all the steep hills and by the second half this had morphed into some of the shallow ones too! The route was hilly and the Saturday in question was possibly the windiest day of the year. At times running back (into the Westerly gale) it was like running on an outdoor treadmill! Thanks though to Lewis Issacs (who I met for the first time) for holding many gates open for us old chaps as he comfortably ‘breezed’ his way along…and many thanks to Liz Halliday for meeting us at Plumpton on the way back and making sure we kept running (just!) if only for the photos! 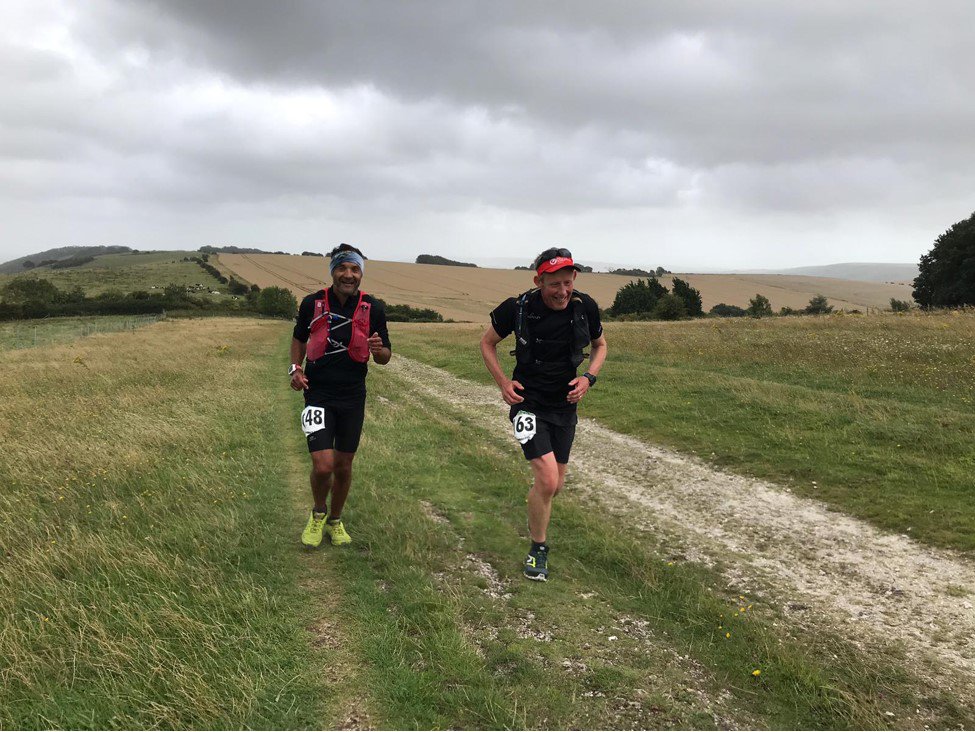 After quite a lot of cursing, just over 5 hours of slog, we eventually made it back to base (11th= out of 32 finishers – 14 were sensible enough to not start!). We were greeted by Eogan McKenna, my wife and hound, and a couple of other runners and marshals and received a bottle of cider and a trinket medal for our troubles…! As I say, it is all very low key, but actually feels earthy and real, refreshingly so when compared to massive corporate events like Ironman!

My final accomplishment was to drive off leaving my keys on the front wheel of the car, and consequently in the middle of a field…but you’ll be relieved to know a few hours later we went back and managed to find the proverbial needle in a haystack…quite how, I still don’t know! 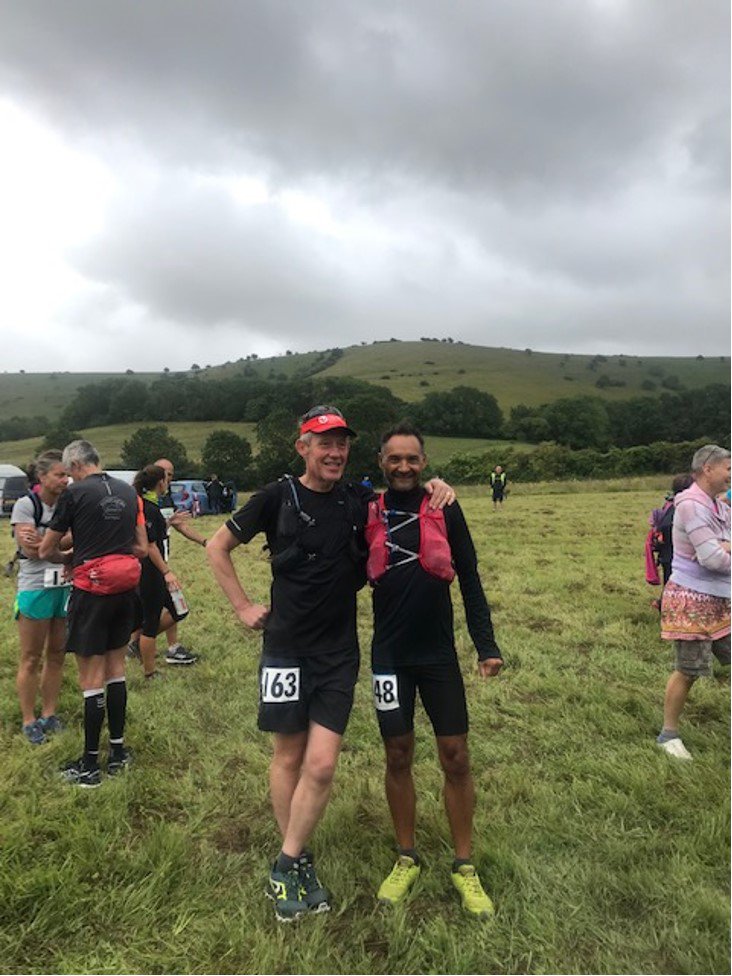 Looking forward (ish) to the next one already…38 miles of Downslink in October!

Thanks to Geoff Pike for the report! 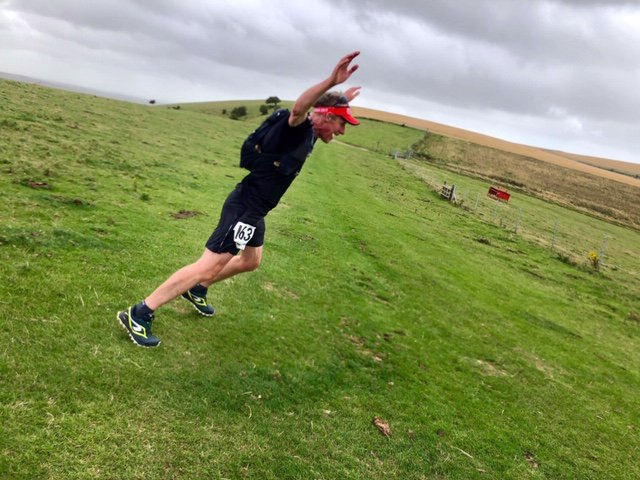