No less than EIGHT big pbs for the 11-strong Phoenix squad who raced round the Goodwood motor circuit to the finishing line at the Chichester Priory 10k on February 3rd.

Paul Weir broke 35 mnutes for the first time whilst Paul Whelpton gave another indication of his misspent youth (and middle age) by posting his fastest time for over 30 years.Others to claim pbs were Ash Dorrington, Phil Hampshire, Steve Atkinson, Phil Grabsky, Malcolm Kemp and Cat Bounds.

The huge number of pbs set overall in the race might raise questions over the course measurement, though it is more likely that the perfect sunny, cool and exceptionally windless conditions were the key factor. The male and female course records were both broken and the first seven finishers all ducked under the 30-minute barrier.

There were Sussex Championship medals at stake and we claimed four of them – silvers in V50-59, V60-69 and V70 for Steve Atkinson, Phil Hampshire and Malcolm Kemp respectively, andV60-69 gold for Paul Whelpton. The field was exceptionally high quality across all age groups, with runners from far afield attracted by the race’s status as a qualifier for the England team for the Age Group International due to take place inBirmingham thisMay.

At the time of writing it looks as though Paul Whelpton, who finished as 2ndV65 to guarantee his selection, may be our only representative there this year. Highlight of the day though has to be the welcome return to action of Bob Novis after his long period of recovery from serious injury. 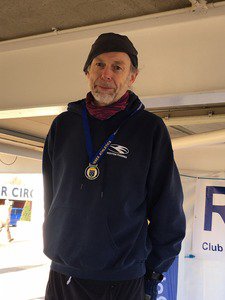