Phoenix would like to congratulate Chris Berry on his MBE for his work developing Sierra Leone's education services.

Phoenix member & Dad to Anna, Rachel & Mekdes, Chris has been made a Member of the Order of the British Empire (MBE) for his work developing Sierra Leone's education services and helping young people go to and stay in school Following the Ebola crisis. Chris explained how he got involved in the project:

"I work for the Department for International Development (dfid) as an education adviser. I volunteered for three months post Ebola in 2015 to help schools reopen and subsequently took up the post of senior education adviser in summer 2016. I first worked in Sierra Leone as a teacher of English from 1983 - 1986. Learning levels are very low in Sierra Leone schools and girls have a tough time staying in school. DFID's work is tackling both these challenges in secondary schools and reaches 400,000 students.

My kids (Anna, Rachel and Mekdes) joined Phoenix when we came back from Ethiopia in 2013” 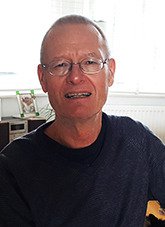