Todd does the Double

The New year's Day double parkrun is becoming increasingly popular with record numbers at both events. first was the Hove prom parkrun at 9am followed by Hove park at 10:30am. Twenty seven Phoenix athletes ran the first of whom twenty one jogged up the hill to Hove Park for the second with 29 from Phoenix running there. Rumour has it that a few of the vets stopped off for a pint in between. The media team couldn't possibly comment!

You'd have thought that this would be just a fun outing but there were some stunning performances. Alex Bonzi, Cyril Crua, Ollie Akesson, Phil Grabsky and Madelaine Parmar all ran PBs as did the race winner Todd Leckie who used the occasion to knock an astonishing 23 seconds off his previous best, winning in 15:46. Doubtless they'd all been tucked up in bed by 9pm the night before!

On to Hove Park where Todd repeated the performance, winning in 16:01 and knocking 22 seconds off his previous best. Ollie Akesson ran his second PB of the day and Pete Goodman also ran a PB unfazed by his earlier effort at Hove Prom.

The overall numbers were astounding with 787 running on the Prom and 826 at Hove Park. Both venues struggled to get finishers processed but it was a sensational experience.

Let's all do it again next year. 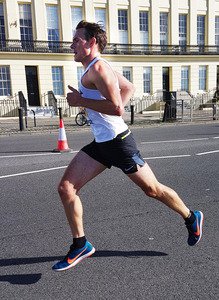