Brighton 10k was my last target race the year. I know, there are other races coming up, but they involve either hills or mud, or both. So this is more my thing: flat and fast (speed being relative). My goal was to go under 36mins, and training had been going OK at Wednesday’s track sessions, but my regular road runs were mostly “trending slower” on Strava. I’d stepped up my weekly mileage, which could help explain my drop in pace, as could the extra 2kgs of weight I’ve put on since the track season (just a bit of padding to help get through winter).

Three days before the race, disaster seemingly struck. On an evening run down an unlit country lane I stepped into a shoe-sized pothole and twisted my ankle. It was still hurting the day before the race, but I could at least run, and it was my last target last race after all.

Next day, race day: cold and windy. I warmed up wearing gloves and threatened to wear them for the race, until Nigel Herron counter-threatened to have me thrown out of the club for doing so. They went in with the bag drop, then we lined up and were soon off and running.

It was fast and warm to the turn, and with that tailwind I was well up on target average, finding myself pushing the pace with a group of similar paced runners. Into the headwind, and we were sharing the work well, constantly passing runners. No pain whatsoever form the ankle - race adrenaline is an amazing thing. Over the slight incline past the pier I spotted Jonny McCormack in a small group ahead. At about 2k to go and the leaders came back towards us – proud to see four Phoenix elites at the front of the race, with Ross Skelton running in second and Ian Leitch and Archie Davis battling for podium, chased by Max Dumbrell. Running hard into the turn, I needed a breather, but an Uckfield runner (ed: Jamie Keddie) accelerated and I welcomed the encouragement from my middle distance training partner, Tom Clewley, shouted as he headed towards the turn himself. The Uckfield guy was on it, and dragged us past Jonny’s group before the race to the line. With my eyes fixed on the clock, I could see I’d done it: sub 36. My official chip time was 35:40, for 77th place. A 10k pb for my comeback era (my actual 10k pb was set 1985 and yeah, kids, that’s before the internet existed).

Thanks to Steve Atkinson for the report!

Thanks to Josh for the photos. The yellow and blue vests are Sussex team as sported by Beth and Archie 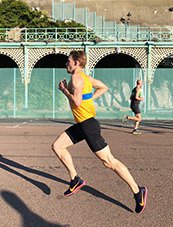 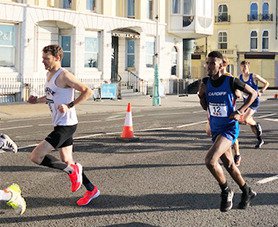