Celebrations were in order for the club last weekend (20th October) as the Phoenix men's team posted an impressive 5th place at the annual SEAA Southern Cross Country Relays - the highest ever placing by a team from Sussex.

The quartet were blessed with one of the warmest October days in recent history, as well as a generously flat course just shy of 5k, which would always compliment a team of runners who weren't traditionally suited to the cross country season.

Phoenix were lead out by Max Pickard who made his intentions clear right from the gun, moving to the front of the race to gain a strong position. Despite a couple of very strong athletes from Highgate Harriers pulling away, Pickard managed to stay well in contention, finishing fast to hand over in sixth position.

Leg two was run by the newest member of the Phoenix AC team Declan Neary - the Yorkshire-born man ran sensationally to gain a further two positions, rounding off his leg in fourth place with a time of 14:25; the 13th fastest time of the day.

He handed over to Oliver Johnson who provided the team with another solid effort, holding his position well to take Phoenix into the final leg in sixth place - not bad for a young man who has barely started his Winter training following a Summer break.

The final leg of the day came from Archie Davis, who had to put up with being chased down by the two fastest athletes of the day - one of those a current training partner of Double-Double Olympic champion Mo Farah.
After running the majority of the final leg by himself, Davis picked up one more place to take the team to fifth, running the ninth fastest leg of the day in an impressive 14:15.

An exceptional performance from the whole team at such an early stage of the season - proving that the depth of Phoenix's running squad is possibly the strongest it has ever been. That says a lot for a club with such a successful history...”

”The Southern Cross Relays were much more difficult in comparison to the Sussex Cross Country Relays. The course was much flatter but it was also very uneven underfoot so it was difficult to get into a good rhythm. Max Pickard and Declan Neary did very well in the first two legs and handed over to me in 3rd. I handed over to Archie in 5th and that's where we finished. There were some top half marathon/10k/5k runners that we were up against so we were very pleased with the result. Training prior to this was more endurance based, with 800m reps on the track and a threshold session on the Monday before the race. It was a hot day so it was a very good test.”

Thank you Archie & Ollie for these reports - as impressive as the running! 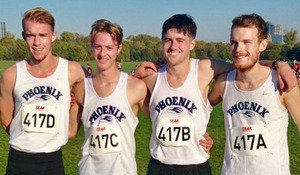 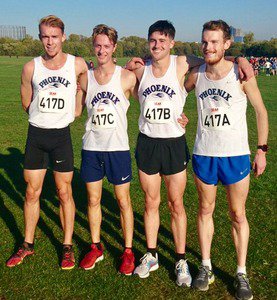