The idiots guide to the Tor Des Geants

“I was first made aware of the Tor Des Geants around five years ago when my friend Cliff told me that another friend Lorenzo had just completed this race, at the time I didn't think much of it. It was not until I was taking part in the Lavaredo Ultra Trail that I was made aware of how tough it was. It was in Cortina, Italy where Kevin Bush and I were wearing our UTMB finisher tops and Lorenzo came out wearing his Tor Des Geants finisher top. Kevin commented that our UTMB tops were not in the same league as his finisher jacket.

Being a little competitive, I had to look into this race and when I looked at the distance and height gain I wondered if it was possible to run/march over 200 miles up and down the side of many of the largest mountains in Europe in such a short time. When I read about the race I discovered that the Tor des Géants is one of the premier endurance trail running races in the world. It is a non-stop 340K ultra-trail race covering an entire region; from the 4,000m Italian Alps to the Gran Paradiso Natural Park and the Aosta Valley. The race crosses 34 municipalities, 25 mountain passes, 30 alpine lakes, and 2 national parks. It has a mountain elevation of 24,000m and actual climbing of around 30,000m. On top of this, on average only 50% normally finish the race due to fatigue, illness, weather or injury.

Following my early retirement from my 24/7 job in London I decided that if I didn't have a go now, I would never enter. So in went my entry showing all the previous mountain races I had completed. I also looked at the list of other British runners who had entered and was now even more concerned that: "I am out of my league". But to my excitement I got in, this was quickly followed by that sudden realisation that I now had a massive race ahead of me and it was over twice the length of any other mountain race I had previously completed.

To give myself the best chance possible I did an Andy Pumphrey training Programme (basically do as much as possible without breaking anything) I did on average two competitive, long distance races each month (Marathons/ultras) I ran the South Downs way 100, Transylvania 100, ran a marathon each weekend and also ran up and down the side of the South Downs each week. I can honestly say that since my entry was accepted there has not been a single day the TDG has not been on my mind, this race can take over your life and for me it did.

As well as running this race, for me it was a logistical nightmare. The preparation is so important, you have to take so much kit and you need to plan this race to the finest detail. Because of sleep deprivation you even need a list to remind you what to do at the Life Aid Stations because, when the brain is in a mess you will forget something and your race will be over or you will be disqualified. Your kit even includes transporting running crampons and enough batteries to keep your two head torches running for up to 6 days. If you are discovered without the extensive kit in your running back pack you will be disqualified.

So with two suitcases full of kit, I arrived (a bit stressed) at a nice camp site just outside Courmayeur and pitched my tent and went to bed. All was going to plan? As with all older men we have to get up in the night to have a wee. Unfortunately during this process I fell over and all I remember is waking up on the ground. I said to myself " why are you sleeping outside on the ground" however it soon became apparent to me that I had knocked myself out and had a massive nose bleed. Being a trained first aider I did the usual: wiped myself with a face wipe, did nothing else and went back to bed. However next morning I discovered I had a broken nose, two black eyes, a nasty cut on the side of my face and a sleeping bag and tent covered in blood, all this and I had not even started the race.

Following some First Aid I went into the Courmayeur and discovered the whole town is totally involved with this race. Every shop has TDG posters and there are banners everywhere. I went to the registration and they checked almost every part of my kit and did a pre-race delivery that took well over an hour. Very different to the 5 minute pre-race briefing I normally get.

Next morning, was the day of the race, so on with the running kit and a 20L running bag that has so much kit in it that you think you are carrying a small child on your back. I am now at the start with 900 other hopeful competitors, to say I'm nervous is an understatement. We now have well over 200 miles to run and about 28 mountains to run up and down. The send-off was amazing with thousands of spectators, lining the streets and cheering us off.

Almost immediately we marched up the first mountain of over 2500m and then immediately down the other side. Then as soon as we came down one mountain we went straight up the next one and this is why it's called TOR DES GEANTS. You don't get nice flat bits to jog along, except for one small section it's almost all straight up and straight down one mountain after another. Many of the mountain paths are extremely technical and dangerous; one slip in the wrong place and you will plunge down a mountain. Sadly people do get injured and last year one poor guy was killed. The only way I could cope with this was to just pretend the drops were not there. The terrain on many of the climbs are extremely brutal and you often question how you will get to the top and then when you finally make it to the top you think how the hell will I get down there.

To put the height and terrain into some prospective, Ben Nevis is 1,345M whereas most of these mountains are over 2,500M. In addition the terrain destroys your kit. During the event I wrecked a brand new pair of trainers, destroyed two pairs of socks, destroyed a Gore-Tex pair of trousers, snapped one running pole and broke the handle on the other running pole.

Smelly - After 3 days in the same clothes I finally had the chance to change into a set of clean clothes. Up to that point I must have stunk. Lucky for me I have no sense of smell. Anyone who knows me will be aware that since a head injury I have no sense of smell. However even I could taste (in the air) how bad I stunk. If you decide to do this race you need to be aware that a packet of wet wipes in your life bag is a must.

Sleep - We started this race at Sunday lunchtime and I finished at 12.20 on Saturday morning 132 hour later. During that time I had just 5 hours sleep. I don't know how I kept going with so little sleep but somehow with power naps I did. For example on the last final uphill section before the last 5k run down into Courmayeur I was so desperate for sleep that I kept falling over and did the "keep one eye shut trick". At the top of the hill was an aid station, so I collapsed on to a deck chair and asked them to wake me in half an hour, I then passed out? Half an hour later, when they woke me, I was back to normal and ran all the way down an evil technical track to the finish without any problem.

The Weather was good during most days it was 25-30 degrees and at night on the mountains it was below freezing. We had one lightning storm and two nights of rain. At one point we thought we were in a middle of a monsoon? This happened whilst going up one mountain on a wet night. We suddenly had some amazing sporadic rain, the rain was so heavy that you could almost drown in, this went on for around two minutes until, we realised we had stupidly walked off course and were inside a field with those massive sprinklers.

Diet - When you are running, marching and climbing for 23 hours a day you probably consume between 8,000-10,000 calories, somehow you need to put as much of this back as is possible. The food was good and I managed my diet very well, at each station I always consumed a bowl of pasta with ham cheese, bread and fruit. I also filled up a goody bag with biscuits, sweets and dried fruit of which I grazed on between stations. This worked well for me and kept my energy levels up. During the week I only lost around half a stone in weight.

The Route & Support - The route is spectacular and I was privileged to witness some of the best views I had ever seen. The course was very well marked and I only went slightly off-course 3 times. There were over 2,000 support staff, that is two for each runner and the aid stations were second to none, also some of the people were at the aid stations for 2-3 days.

Cows - One small risk is the wildlife and on one occasion we did have an incident where a large herd of cows went a bit mad and stampeded a few of us, it is strange that even when you are totally knackered and your life is at risk you have this energy to run like hell.

The race is so strange in that, there is no end to it, you finish one day and it just rolls into the next day and then the next night and so on, it just seems to go on and on. When I got to Courmayeur and the finish was a few hundred yards away I knew then I had done it. I didn't care who was in bed at 12.20am I was going to celebrate. I was not shy about my finish and let the whole town know that Andy from the UK had arrived. Luckily for me a few hundred late drinkers were still up and more than happy to cheer me in. At the finish you run up a large platform and celebrate. I celebrated the hardest thing I have ever done in my life.

The race took me 132 hours, I came 260th out of 900, I was extremely pleased with my race and how it all went, and other than my broken nose I only had one small blister.

I have now been back one week and I need to rest up for a bit, as I physically knackered.” 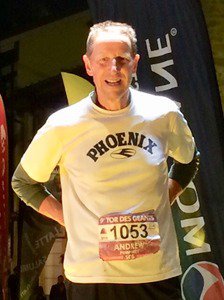 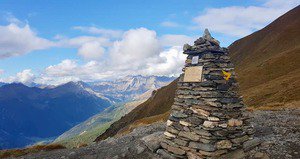 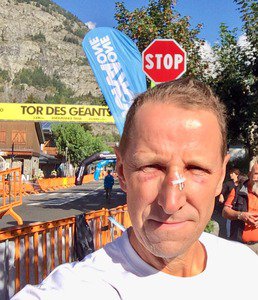 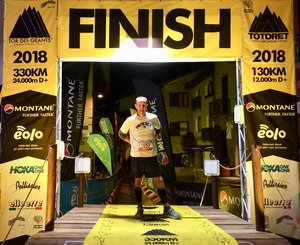