The Phoenix contingent at the 2018 World Master Athletics Championships must have been one of the largest from any single club, with 8 Phoenix members - all first-timers despite an average of around 60 - making the trip to Malaga. We asked some of the members of our squad to pick out some of the best moments for us

PHIL GRABSKY: Malaga 2018. I have to be honest : I don't think I had heard of the term ‘Masters' until recently but one of the joys of running for me has recently been working out what terms like V50, SGP and VO2 meant. Now I can add ‘Masters'. Basically races for anyone over 35. This year's world champs in Malaga seemed like a great idea, especially when 7 of your buddies are going too - so, lo & behold, I find myself one hot and humid Wednesday evening lining up in a stadium alongside runners from Bolivia, Chile, India, Turkey, Spain, Argentina, Australia and the GB for a 5000m. I should add that I had only done my first ever 5000m track race a month before and this is very different to a Park Run. Twelve and a half laps - not a bollard, cone or dog-on-a-lead in sight. My fear was it would be a bit dull but it certainly isn't that. I also thought it would automatically be faster than a Park Run (I run around 20-15 to 20-30 with a PB of 19-56) but it isn't that either. It's both an exercise in pacing and a proper race. I was only a novice but already I knew that who you choose to run behind makes a big difference and, as I kept telling myself leading up to the gun, don't go off too fast. Two weeks earlier - in my second 5000m on a track - there had been a pacer for 20'. I chose to try and follow him: the first lap seemed slow & stately and loads of people had bounded off in front of us but by the third k we were passing them. We kept to a steady 4'/km all the way and with a bit of a sprint at the end I hit a 19-56. So I knew at Malaga not to rush off at the start. And what happened? Bang - and sprint. I find myself in third place after one km running at 3-40'/km - I know it's too quick but I try to hold on rather than slow down (which I soon start doing anyway). This time it was me who became the hare that the tortoises passed. I came in 7th (in my race which was the slowest of the three 5000m V55 finals) in 20-25. A bit disappointing but the point was it really didn't matter - I had run in an international championship - been cheered on by those who knew me and plenty who didn't. I also got to see others run - both friends and total unknowns (from superb quick 5k runners to ‘hats-off-to-them-for-being-there 90-year-old long jumpers...). Watching your pals do their races and, in some cases, win medals was thrilling. Malaga itself was great (and with beer at two euros a glass!) and full of 8000 international athletes. It was a bit embarrassing wearing a GB vest that I had earnt only by paying an entry fee but I was proud and excited to do so too. And half the battle and credit of any race is ensuring you're on the start line. In sum, I can't recommend it enough - whatever your standard - and there will be plenty of us to cheer you on at the Europeans in Venice next year or the World Championships in Toronto the year after.

PAUL WHELPTON: Although we experienced mixed fortunes in our races on the track and road, the experience was a fabulous one for all of us. The atmosphere really does feel quite similar to the Olympics, with thousands of athletes in their national kit thronging the stands and competing against each other. There are some obvious differences of course: the age range of the athletes starts at 35 and goes all the way to over 100, and there are no minimum qualifying standards, so many of the events feature fun-runners mingling - at least at the start of the race - with the world-class ones.

The number one highlight for me has of course to be returning with a full set of medals - Individual silver in the 10k road race plus Individual bronze and Team gold in the Half Marathon. They were both really exciting races, ending with a lap of the track at the Main Stadium where my lack of finishing speed made things difficult, as I clung on to second place in the 10k by just six seconds and got squeezed into third place by just 3 seconds in the Half Marathon. I loved the friendliness from other athletes, and the spectating too, especially seeing Steve Atkinson post 3 pbs in the 800m and 1500m races and fight his way back on the last lap of the 1500m semi to make it into the Final after three runners had overtaken him.

STEVE SELBY: Away from the track we savour life in bustling Malaga; early morning walks through the now quiet maze of alleyways , only recently vacated by boisterous revellers heading homewards after waking us in the small hours (the one drawback of our centrally-located flat! ). We break into a jog in the morning sun for a half hour run through the lovely botanic gardens with sunlight breaking through the canopy of trees above our heads. We then return to our flat for the team breakfast of coffee / fresh bread / jam / eggs and avocado on toast. Then it's off to Carranque Stadium to see the world's best over 35s perform amazing feats of age on the track to thunderous applause . Sore throats ease as we head back to the flat to listen tolerantly to Whelpton's daily musings on who his potential rivals may be in the Half. The Kenyan? Who is this Kenyan ? Surely his reported times can't be accurate? We all ponder ... !

MALCOLM KEMP: One of my most memorable moments was when I registered for my races at the imposing main stadium on the day I arrived. I walked out on to the gallery in the towering main stand and was confronted by this 9-laned blue track, thinking I've got to run twelve and a half laps on that in two days time!

NIGEL HERRON: A fantastic experience. The standard was world-quality but completely inclusive. We were all athletes together, speaking the language of "Ouch!That hurts".?Come and join us on the next adventure, if you are old enough!
-- 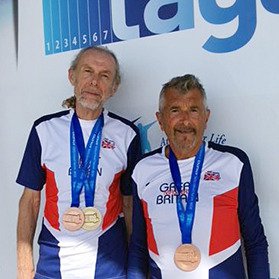 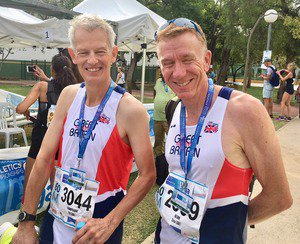 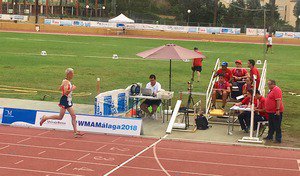 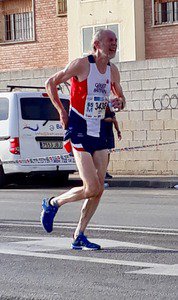 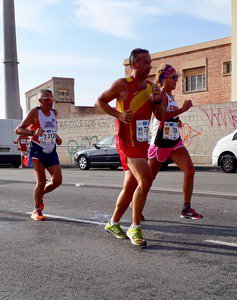 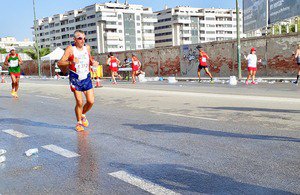 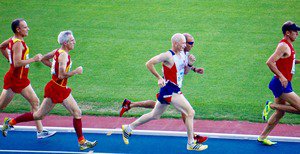 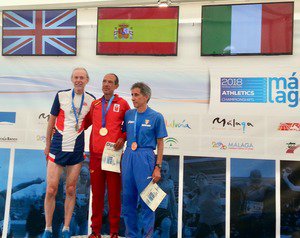 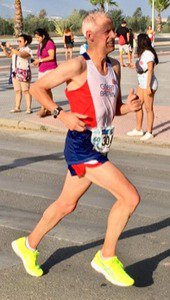 « Bristol massif! The idiots guide to the Tor Des Geants »