Master of the Quick Half?

Paul Whelpton reports on the British Masters Half Marathon Championships held at Redhill Aerodrome on July 22nd where his time of 1:28:25 landed him the national V65 title by a margin of over 5 minutes..

“One of the things I love about running is how you can move from near despair to elation in the space of an hour or so. In the lead up to this race I felt anything but a master (what a daft name that is for us older athletes!) after some poor form in training and a couple of seriously disappointing recent runs - wilting in the sun at Bewl and inexplicably running out of steam at the Phoenix 10k.

It was of course yet another hot day, and we were faced with a hilly two-lap course along undulating country lanes, so my plan, given my gloom at lack of form, was just to go out to try and enjoy the race and run at least the first half at a sensible pace, well under pb level. But as usual the adrenalin kicked in and after 4 miles I was still running almost at pb pace and had my closest rival (South London Harrier Ian Kitching, 2nd in the World Masters Marathon Champs in 2016) breathing (in very quiet and relaxed fashion unlike me) down my neck. “This is too quick!” I said to him several times, and after around 6 miles I slowed down to see if this might persuade him to see an opportunity and move out of my slipstream and give me a tow for a bit, but nothing doing.

On the second lap at around the 8-mile mark we reached the hilliest part of the course and seeing as climbing (unlike a fast finish!) is one of my strengths I pushed on quite hard and to my surprise opened a small gap up on Ian. From then on it was just grit teeth, try to hang on to whoever I could see in front of me, and put any thoughts of Ian storming past me in the last half mile out of my head. And as it turned out, although I did fade and ran the second half of the race around 20 seconds a mile slower than the first half, expecting to see Ian on my shoulder at any moment, he must have felt the effects of my early pacesetting much worse than I did and tied up badly, eventually finishing as third V65 7 minutes or so behind me. I had no idea I had so much time in hand, and pushed on for dear life over the last couple of miles before performing my usual trick of collapsing a few yards past the finishing line with a kindly St Johns Ambulance man coaxing me to roll out of the way to reduce the risk of being trodden on by other flagging finishers. Had a good bit of banter with Ian and fellow V65 Des Michael afterwards and can now look forward to renewing battle at the World Champs in Malaga in September.

Possibly a bit undignified racing with a little card pinned on your back displaying your age to all and sundry, but I never minded everyone knowing my age when I was a kid and I am certainly enjoying my running much more than I used to back then. Apparently in age-grading terms I am now the equivalent of the 8-year olds we generally advise to stick to parkruns and come back to join Phoenix when they are a little bit older…” 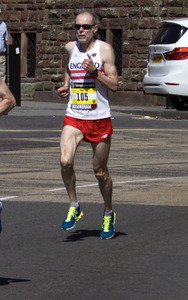