Injury and illness whilst training did not stop Malcolm Hughes win in his age category at the Southport Triathlon, may 20th. Read on for his report....

“Looking back at the Southport triathlon, I went to the race hoping for a good result but was not sure how it was going to go.
My winter and spring training had a couple of mishaps so I was not physically where I would have liked; In January I tripped on a route during one of the cross-country races injuring my ankle slightly. This meant I had a couple of weeks of no running at a time when I was supposed to be building the distances. Then in late March early April I came down with a bug which meant I had another 2 weeks off training at the beginning of my build phase, when I start speed endurance.

At the beginning of May I did the Steyning triathlon which did not go as well as I had hoped as I finished almost 3 minutes down on the previous year. That was two weeks before Southport....
So with my first sea swims of the year and 3 solid bike/ run brick sessions followed by some recovery, I put in the best preparation I could for the race....and it seemed to pay off [Malcolm finished first in his age category]!
My time was similar to Ripon, last year, which was also a flat course.
It's always great to get a medal at these championship races. A small reward for the hard work.
Next up I am doing the Leeds triathlon which is June the 10th. This is the Great Britain age group championships and also a qualifier for the European Championships next year. I am also going to attempt to qualify for the World Championships 2019 at the Leeds Castle Triathlon. In September I will be in the Gold Coast Australia for the world championships.”

Thank you Malcolm for this report & picture 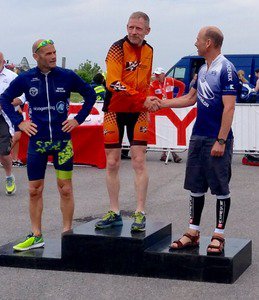