“I completed Boston Marathon this year, in what was described in the New York Times as the ‘craziest weather conditions for 30 years (until London's hottest on record!). Clearly a crazy year and who said climate change wasn't happening?

So why Boston? Well, it's a bucket list marathon; the world's oldest annual marathon, one of the 6 abbot major world marathons and the only one you have to qualify for. They only issue with doing a marathon that only has good marathon runners is that you worry you're going to come last!! Fear is definitely a good training motivator as this year I've really tried to put the work in so I wouldn't completely embarrass myself! I was still terrified as everybody I spoke to talked about it being their worse marathon - starting too fast and then blowing up at ‘heart break hill'. I've never been a particularly disciplined runner so was convinced that this was going to happen to me. For those that don't know the profile of Boston it starts out in Hopkinton and then runs through 8 Massachusetts towns into Boston. It starts with a steep descent (hence going too fast) and then at Mile 16 the hills start just when you are getting a little tired culminating with the 0.8 mile Heartbreak Hill at mile 20 (the clue is in the title!)

About 2 weeks before we started getting emails warning it might rain and to dress appropriately, but who's going to wear gloves and a rain jacket in a major?!! I arrive on a beautiful sunny day and the atmosphere is amazing - blue and yellow plant pots outside every shop and restaurant, good luck messages on the windows, a massive expo with everyone piece of kit imaginable so I'm starting to get excited. However, the next day we woke up to snow and absolutely freezing temperatures. gulp! Every one is standing at the coffee machine in the hotel asking each other what they plan to wear and going out for runs with new race day kit all with slightly panicked looks on their faces. As we all know runners are a superstitious lot so changing outfits at the last hour is nerve racking. Clearly people have been out shopping as you can't find ponchos or gloves for love nor money anyway..Sold out Sold out - I must have gone to over 8 sports shops!

The morning of the race there is torrential rain and it's so cold. People are dressing in all sorts of gear - plastic bags over the trainers and on their heads , the obligatory bin liners, socks on their hands and in my case wearing full rain gear. There is about an hour bus journey to the start at Hopkinton but you drop off bags for the finish before you get on the bus so whatever you take is going to be left there. By this point I don't care as there is a lot of hanging around when we arrive - I just want to be warm and dry for as long as possible.

We head to the start and everybody is in good spirits laughing at the situation and at other people's wardrobe choices. There were some seriously bad wardrobe choices which is why 2500 people ended up in the medical tents being treated with hypothermia!
So my pen starts off.. All the silly targets I'd set myself ahead of the day I knew were no longer achievable which I think helped me relax. I had to grind through it, keep going and if possible pull off a PB and that was what I did. I started slower than I originally planned but I kept if fairly constant and I knew the 2nd half was going to be slower than the first so planned for that. It was definitely a marathon that made me appreciate my experience as I kept saying to myself little stories like ‘this is not as bad as the Steyning Stinger as at least there isn't mud' and ‘this hill doesn't go as long as the one in Hastings' pulling on any bit of experience that could help me. I can't say I noticed all the views and towns along the way as it was too miserable, but I did appreciate the spectators and the volunteers as I'm not sure I would have been there had I not been running. What I do remember clearly is turning the final corner, nearly in tears knowing that I was going to finish the historic Boston marathon, I was going to get a PB (as Mike says a long 3.26 from 3.28. and I did it in the most ridiculous weather conditions. It certainly goes down as one of my proudest marathons to date and one I still have to pinch myself about (not bad for a girl who did her first ever race/marathon in over 5h in 2012)

So what next? Well this is only the start of my journey to complete the 6 Abbot World Majors on ‘good for age' places. I have Chicago in October and then will be applying for London, Tokyo, New York. I'm still yet to qualify for Berlin where I need 3.20, so still some work to do. Definitely no chance of me hanging up my trainers anytime soon!” 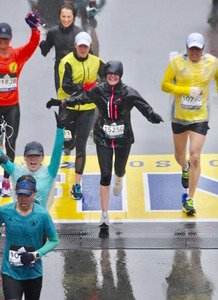 « ¡Hasta La Vista Hastings! Back to the Track »