After twice missing out on top spot in the V60 category in previous years at the South of England Masters Cross County Championships it was third time lucky for Paul Whelpton at Horspath, Oxford on December 9th, as he made it a day of double success for Phoenix by claiming the V65 Men's title, to add to Almi Nerurkar's win in the U17 Girls Intercounties race (see our newspiece Almi Succeeds for Sussex).

Paul came home over three minutes ahead of his nearest rival in the V65 race, also finishing ahead of all the V60 runners who were racing over the same 10k course. He commented:
"No idea at all where that run came from after three months of niggling injuries and half-speed training. I think I will have to give the credit to my Nutritionist and fellow SGP teammate Izzy Anderson and her partner Paul Weir for some unexpected help. Normally the day before a race my nerves kick in and I wake up the next morning with my insides in very bad shape, but this time Paul sent me a lovely picture of Izzy and their new baby which worked wonders; I went to bed with a smile on my face and woke on the day of the race full of internal calm!"

Our only other representative at the Masters Championships was Head Coach Malcolm Kemp, who came home fifth in a very competitive V70 race over a course that was too short and flat for his liking.

Disappointingly our low turnout put us out of contention for any of the team medals, though with our current crop of quality V40 and V50 runners it would be very worthwhile to have a crack at these next year. 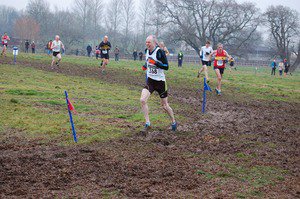 « Brilliant turn out for Sports Hall Boxing Day a Knockout »