A Giant Step for Phoenix??

A Giant Step for Phoenix??

Many of us in the club enjoy carrying the Phoenix flame overseas to take part in international races and I thought I would continue the tradition this year following on from previous races I have done in Majorca, Germany, Lanzarote, Portugal and Italy ... this time I did not actually go abroad but I did travel across the Irish Sea to the spectacular coast of Northern Ireland between Portrush and Ballycastle where the famous Giants Causeway is found! The annual "Causeway Coast" race is a multi-distance event with 10k, half marathon, full marathon and even ultra marathon options! I went with a party of running friends, two doing the marathon, one bravely attempting the ultra but most of us, including me, happy to plump for the half marathon ...

And what a half it was! After a relatively late rendezvous accounting for local tides, we were transported by bus from race HQ at Portballintrae to Larrybane Bay ... quite a foreboding start point, being in a disused quarry built into the cliffs with none of the usual pre-race facilities!
Little clues had been given as to the nature of the course other than that it was coastal (indeed the main instruction seemed to be strictly no calls of nature in the quarry as this is National Trust owned land!). And I was soon to discover that coastal was meant in a literal sense as, after small sections of path and road running, we suddenly found ourselves clambering over seaweed covered rocks to get round the headlands before stretches of beach running.

Naturally this put pay to any notion of consistent pacing as the primary requirement was concentration to avoid slipping and incurring injury - so a fast time was out of the window! Thankfully, the terrain did improve in the second half of the race with longer sections of coastal footpath but, as we were up on the cliff line, there were numerous ups and downs, as well as stiles and steps to negotiate plus the wind became a factor as the elevation increased. We eventually passed close to the Giants Causeway itself (catching up some of the returning
marathon and ultra marathon runners) before rounding the final headland and, for once, behind the final bay (through a golf course) rather than across it, before arriving at the finish ... muddy, wet but exhilarated! I was greeted by one of my colleagues who had completed the marathon and we then waited for the rest of our party to come in (sustained by the free post-race burger!) - thankfully all did so in one piece!

My time was 1:58 (49th position out of 447 runners); certainly one of my slowest half marathon times but I was happy nonetheless bearing in mind the nature of the course!

The scenery did not disappoint; the coastline there has a rugged beauty with a sparkling sea and views of Scotland to the north! I would have to say it was one of the most dangerous races I have done and wonder if a few health & safety questions wculd be raised here (I have yet to do the Seven Sisters Marathon - a daunting task but at least you don't run at the bottom of the cliffs!) but it was a great experience nonetheless. One for some other Phoenix Giants to tick off? 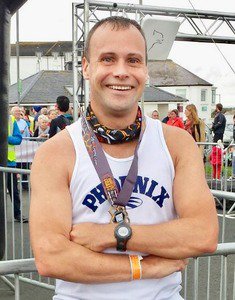 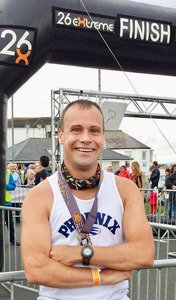 « Good in the wood All go with Turbo »