Tom Sanderson gives his account of his first Iron Man:

‘I can't quite believe that three months ago I was only a few days away from my first ironman. I've been wanting to attempt to do one for many years now, seeing various friends and fellow club members notching them up, and 12 months ago I felt now was the right time for me. I signed myself up for Ironman UK 2017, up in Bolton (I like hills!) took on Phoenix's Jon Pike as my coach and ploughed into the crazy but beautiful world of triathlon.

I've always been a runner. After my 8th marathon I was craving a new challenge and the 2.4mile swim, 112 mile bike ride and 26.2 mile run seemed like the perfect answer. I gave myself just over a year to train for it and during that time thanks to Coach Pike, learnt about this new world of Mitre time trials, V02 max bricks, Albourne laps, Mill Lane hill reps, Neurukar progressive 10ks, Red Mist swims and some how fitting all this into a normal working life. The training was intense but amazingly fulfilling and gave me an understanding of the phrase 'train,eat,sleep,repeat...'

You get into a bubble when you train for an ironman and almost before I knew it I was up in Bolton ready to start my race. The event itself was highly organised and everything you would expect from a major sports brand. My swim was steady and went to plan, luckily no panic attacks! I had a long T1 sorting out my nerves (silly boy!) and then off on the bike for some South Pennine hills! The weather was wet but a few hours into the ride and the sun cracked through. The bike leg felt great and I kept to the outputs that Jon had previously given me, overtaking lots of people and enjoying the crowd support along the route and up the infamous Sheep House Lane climb. The ride is 2 laps of a hilly course (did I mention the hills) and then back into town for T2 and on to the marathon. The first 20km felt good, you run from Bolton football stadium and then begin running laps in and out of town up a big hill, a bit like reps up and down Dyke Road for 26 miles. The last 10km was pretty grim but I was expecting that. Suddenly you're in that finishers shoot, and all the training, early mornings and missed sessions down the pub, they all become completely worth it.

The whole experience is a journey. If you have an inkling of wanting to do one, just go for it. One of the most amazing things. And yes, I would love to do another one.

It's very difficult to do these kind of things on your own, and many people helped me.
Thanks so much to Jon Pike for all his advice and coaching, I couldn't have done it without him, Anita Jones, my cycling buddy and mental support, Vicki Linton-Crook for sorting out my appalling swimming technique, Andy Bone for being Andy Bone and Rachael Woolston for telling me I could do it, and not dumping me! Big ups!’ 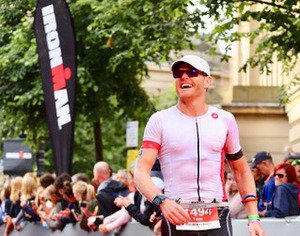 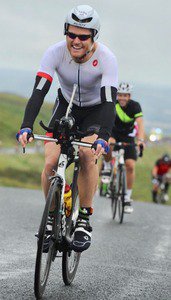 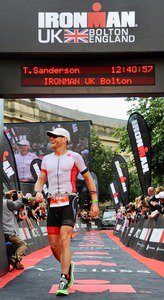 « Challenge accepted! Good in the wood »