Now Malcolm has much experience of ultra running. A regular marathon and half marathon runner, back in the day he ran the SDW 80 mile race a good few times. Phil Hampshire on the other hand was primarily a middle distance runner who, in a moment of madness, offered to accompany Malcolm on this epic run.

Jane Edmonds had kindly offered to do all the support driving and partner Andrew Haig was there to offer encouragement and ribald comments to his training companions (OK, to be fair he did run the last third with them.)

The big problem turned out to be the heat of the day and on the first two legs the boys took insufficient water with them. It's not easy to rectify that kind of deficit and I think the runners would agree that the whole thing was tough, tough tough. It didn't help that we bumped into young Finn McNally doing effortless strides along the lay-by at Upper Beeding. Phil was probably having the better of it in the latter stages whilst Malcolm's legs were threatening to cramp up and he had to adjust pace accordingly. Andrew had joined the run at Upper Beeding and spirits were raised when first Jon Wright and later Rick Taub appeared to accompany us to the end.

There was a bit of a party atmosphere at Saddlescombe Farm too where we had arranged to meet support driver Jane doing a sterling job but were also cheered on by Linda, Jeanette, Sophie and baby Lily.

Congratulations Malcolm –70K for your 70th. We can hardly wait to see what you are going to do for your 80th!

So what did our two runners make of it?

"Why is it when you get older you think you can run the distances you did years ago. To celebrate my 70th year I thought I needed a challenge and decided to do a 70k run....1k for each year. So on Monday this week my trusty companion Phil Hampshire and I, driven by Jane Edmonds with Andrew Haig in support arrived at Harting Down car park at 8.30 pm to start our epic run to Stanmer Woods Car park via Ditchling Beacon. With my one and only longest preparation run of 2 hours 20 minutes completed the Sunday before we set off on a still, sunny morning with a light mist in the valley below.
As we progressed on our journey the sun began to reach temperatures of 25 degrees and the stoney paths proved hard work. The early legs (this run was 8 legs of the South Downs Relay) didn't seem too bad as they weren't so familiar but as we got nearer to Brighton theenormity of our task began to dawn on us. After 24 miles the legs began to get heavy with19 miles still lo go.
Bit by bit we ticked off the distances with Andrew and Jane waiting atstrategic points along the way for refueling.
Penultimatelywe arrived at Devil's Dyke, where we were joined by Jon Wright and his dog and then Rik Taub at Pycombe. Finally Ditchling Beacon was reached just as the sun was setting before we started our descent down through Stanmer Woods to our final destination at Coldean Lane Car Park. 70k (43 miles) – mission accomplished!"
Malcolm

"I went through a stage of feeling awful to one of feeling terrible. Once I started to feel terrible I was ok"
Phil (quoting Steve Ovett) 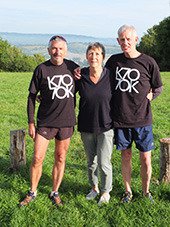 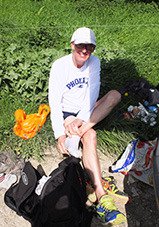 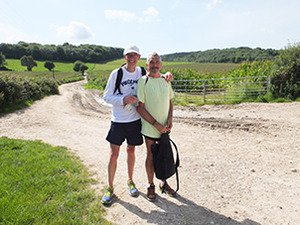 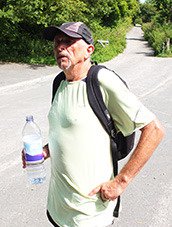 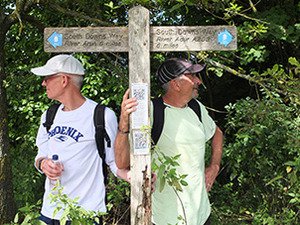 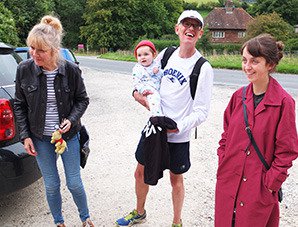 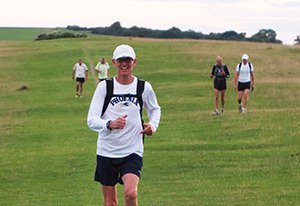 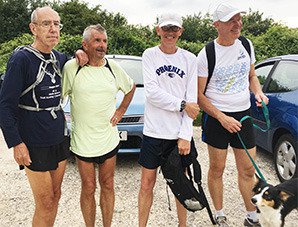 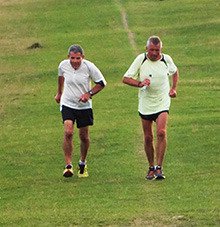