Yes I know, Gloucester is a long way to go in search of a fast half marathon but the high winds and hills of Sussex (plus having to juggle dates around the various Sussex Grand Prix races which I just can’t bear to miss) don’t leave many options.

Race start was 8am on the Sunday morning August 6th, so it meant overnighting in Gloucester (at the frill-less but friendly and convenient Station Hotel). I arrived off the train early on the Saturday afternoon and walked over to Gloucester Docks to pick up my number before checking out the first couple of miles of the race - nice flattish roads,no problem there, and the last couple - paths alongside the Severn - very pretty but stony and rough surfaced, and with three kissing gates to negotiate. I wondered hopefully if they might unbolt and lift these off for the race? (They didn’t of course!). Later in the evening fish pie (in picturesque surroundings at Bills on Gloucester Quays next to the start line) was a pleasant but rash choice for the pre-race carb load, putting my digestive system under extra stress on top of the usual pre-race nerves and restless night; but I was up at 5.30 to make sure everything was under control before the race started!

Bombed along for the first 7 or 8 miles on good flat roads feeling pretty good (actually ran the first 10k quicker than I managed at the Phoenix 10k last month against that pesky headwind!) but as usual slowed in the second half of the race - much of which was on picturesque but rough tracks and paths and not brilliantly marked/marshalled; narrowly avoided following the guy in front of me down a wrong turning into a farmyard manure stack. Plenty of brief words of friendly encouragement exchanged with other runners - though did find it strange that one guy kept calling me ‘Sir’ presumably in recognition of my greying temples. Very glad I was prepared for the kissing gates in the last mile so they didn’t put me off my stride too much, and managed to rally enough to finish more or less on target in around 1:25 - good enough I hope to take me to the top of the runbritain V65 UK rankings!Hopefully I’ll manage to stay there a bit longer than the couple of days I lasted earlier this year in the V60s. But just in case I’ve signed up for the Great Eastern Half in Peterborough in October to have another crack at it.

Apart from the Phoenix factor I haven’t the faintest idea how come four of the fastest five half marathons I’ve run in my whole life have come in the last 18 months so big thanks! 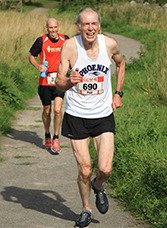