Gold in them there hills

Gold in them there hills!

Phoenix battled it out on the South Downs Way relay on Saturday 1st June, to win two golds, a silver and a bronze. The annual event sees teams of 6 running 3 gruelling legs each of between 4 and 8 miles. Covering a total of 95 miles from Beachy Head, near Eastbourne, to Chilcomb, Winchester this race tests even the toughest resolve.

The race has separate categories for A teams, B teams, Vets teams and Women's teams. The Phoenix A team (seniors) and B team both won gold and the men's vets team won silver. The women were in bronze position.The reports below are sent from the runners:

It was another good SDW relay day good conditions although the NNW wind made some bits quite hard, particularly on the early legs. This being an odd numbered year, 2013, the course was over the tougher Seven Sisters route. The team achieved its best time to date over this harder of the two routes. Two new Brighton Phoenix Ladies records were achieved, these were by Liz Durman on leg 1 and Paule Kremer on leg12. All ran close to or better than the predicted times I had set and we finished 5:11 quicker than our total predicted time.
Our overall time was 13:39:49 - 3rd overall.
Our senior men made an A team in all respects that produced fast running and a fast driver to win the overall and the A team competition - very impressive and next year they'll go for the record.

Our B team also took gold in the B Team competition.
Our vet men won silver the Vet Team competition.
A great turnout with a very good showing from our club - well done all.
Best wishes and Happy Running to all
Liz Halliday

Malcolm has raced well over a dozen South Downs Way relays but his hunger for it never seems to diminish. We had a sweepstake in our van based on estimates for each leg and Malcolm walked away with the thirty quid prize, beating us all by (literally) a country mile. Not bad for a sixty-something. Jim gave us a good start on the stunning but murderous ups and downs of the Seven Sisters and completed a tough trio with legs 7 and 13. He also had to contend with the realisation that he would be sharing his third leg with Ben and Don! Andrew had an even tougher set, including the long 17, and held the team together superbly. John enjoyed a fine debut and Phil was reliable as ever, wrapping up with a strong leg 18 (and definitely finished with the cleanest teeth). I struggled through most of the day but was pleased to see off Butser hill and make it to the end of my three legs. We were naturally delighted to discover that we had won gold in the B team category. Arena 80 were our main rivals and it turned out we had pipped them by three minutes, even though we had not seen them at all as they had set off an hour after us. It would have been great to have raced them for 100 miles, something to ponder next year perhaps. Big thanks to Alan for somehow squeezing past vans coming the other way on lanes one-and-a-half vans wide and to Dave for sterling work on the timing and navigating.
Lance Bellers, B Team Captain

For a great perspective on the event, see Jon Pike's excellent Guardian blog 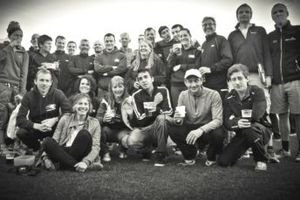 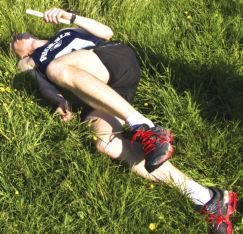 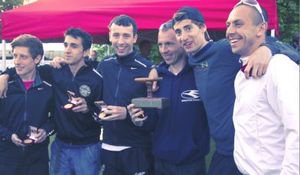 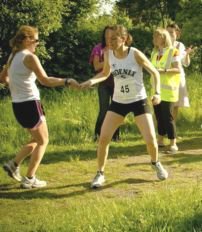 « Spring in their step! The Phoenix Has Risen »