With the passing of club member Bruce Falkner a few months ago the club was decided that a fitting tribute there would be a minutes applause at the start of the 10K and even before Club Chairman Paul Collicutt had finished announcing it to the race, a wave of applause broke out. It was a happy sight to see Bruce’s family attending the race as well as twin brother Shane who chose to run it with a very impressive time of 38.45.

After the perfectly calm weather that runners were treated to on the first running of the Phoenix 10K the weather gods chose not to be so generous with what felt like gale force winds meeting the runners for what would normally be perfect summer conditions for a evening race.

The race was once again a sell out and looks to be progressing well in only its second year. Taking the win this year was Kenyan athlete John Kales but like last year it was only by the smallest of margins beating reigning Southern Cross Country Champion Ben Tickner by 4 seconds to come home in 30.55. With the stiff wind hitting the runners for the first 5k it made record chasing hard going and John who works as a professional pacer at some of the leading world marathons came up short by some 25 odd seconds although it was rumoured that his second half of the race was run in 13.50!! Unfortunately we don’t have the exact splits. John will be hoping to make his full Marathon debut next year and will be looking to run in the 2.08 region. Filling the top three on the men’s side was Neil Boniface one of Sussex top marathon runners.

The women’s race turned out to be a fine race with Cassie Thorp of City of Portsmouth getting the better of some of the top Sussex runners, Rebecca Moore and Fiona Clark. Cassie has been in great shape this summer putting down a 34.27 10k and even with the poor conditions she powered away with a very impressive second half of the race to break the course record in 35.49. Rebecca also used the tail wind to pass Fiona to grab the second place in 36.52 to 37.15.

There was a huge turnout from the club with 31 athletes running top finisher were the already mentioned Ben Tickner and Cat Bounds. Full club results below.

A massive thank you must go Andy Bone’s way in carrying the Phoenix 10K forward as race director, also a big thank you to Liz Halliday in coordinating the marshals and Sue Hudson for managing the late entries and chip timing queries. As well as all the volunteers who played their part as there is no way this race could go ahead without them. The cheering at the turn by Carats Café from John Marinko and his team of the younger members of the club was appreciated by all the runners.

Photos can be found on the Facebook page hear 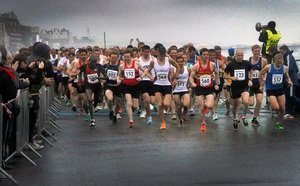