Bruce passed away last week after a prolonged battle with cancer. For those of you who didn’t know him, he was a very active member of the club; even when he was weighed down with his illness he always had a smile.

Below are a few memories from club members and friends:

I have known Bruce for a long time, my son Jake and Bruce's son Tom went to infants school together and were good friends, my wife also knows Sally Bruce's ex-wife.

Bruce loved his running and was pretty good at it, I was never anywhere near as good, but I would try to keep up!

We ran a few Sundays together which was about the only time I could run along side him!

I remember a few months after Bruce had intensive surgery to remove his bladder and part of his stomach, we were lined up at the start of the Lewes Downland 10, we joked and laughed about if I was going to beat him in a race now was my chance, ten tough miles later I was sprinting the last few yards to the finishing line only to see a smiling Bruce shouting encouragement.

The memory of the smiling guy in the Phoenix vest is the Bruce I will remember.

It is really sad to hear of the passing of Bruce. He was a real fighter and one of the fittest guys I knew. Even while battling the cancer over the years, I would still see him out enjoying the quiet tranquility that running over the South Downs brought him.

I remember Bruce being quite shy when he joined the club, but as soon as he realised he was in like-minded company, he embraced it to the full, sharing his passion with his children who also joined and ran for the club. Taking up competitive running as a veteran, most of his best races came over the tough country that he trained on. He excelled at battling tough courses as well as the competition, but for Bruce running was far more about the natural environment that he could immerse himself in.

All who knew him at Phoenix will miss him; my thoughts are with his family.

He was a mild-mannered chap and it was always a pleasure to share a start line with him or the odd pint in the pub at the club Thursday night socials.

I was awestruck with his running ability, especially cross country. It didn’t matter whether it was up or down, Bruce took them on, and it didn’t matter what his illness threw at him – he seemed to take it in his stride. I remember running through Withdean Woods one evening and a lone figure was walking up the hill. It was Bruce and he was following his doctor’s orders: a short walk - this after major surgery only a couple of days before.

He was a phenomenal runner, winning a couple of local marathons as well as the Phoenix Veterans Award on more than one occasion. Only last year he ran a 38-minute Phoenix 10k – no mean feat for a man in palliative care.

Bruce was a gentleman and the Club will miss him immensely. My thoughts go to his family.

I well remember racing against Bruce some years back. He was tough and tenacious and pretty quick too! Only after racing him did I find out how much he had to contend with fighting against his cancer. I couldn’t believe how well he ran with all he had to deal with. Bruce was quite simply inspirational. Bruce was an important figure within our club and he will be sorely missed. All our thoughts go to his family.

I did not know Bruce really well, but I knew him as a runner and there's a special kind of knowledge and bond in that. Simon Barnes writes for the Times, he says 'sport doesn't build character, it reveals it'. And running reveals it in special ways. Bruce was an honest, kind, competitive and gracious guy. I know all of that as a fact because I ran with him, I raced with him, and I spoke to him immediately after one 'Jack and Jill' where he had beaten me by 3 full minutes! The image I have of him now is of meeting him on the path from the Foredown Tower to Devils Dyke, he was running down, I was running up. We stopped, he had already had major treatment and was coming back to form. We spoke for exactly 1 minute, then he said he needed to push on as he thought he might get a PB that day! One minute of Bruce's time, middle of the Downs with no one else around, the right balance of friendship and competitiveness. My heart aches that he will never get to challenge that PB again, I know he would have loved another crack at it!

The Funeral service will be held at Woodvale Crematorium, South Chapel on Wednesday, 30th May at 10.30 a.m. Family flowers only please but donations if desired may be made payable to Macmillan Nurses or the Martlets Hospice c/o Co-operative Funeralcare, 133 London Road, Brighton, BN1 4JH. Tel. 01273 607276. 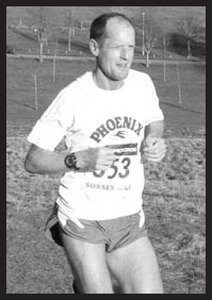