The Big Dogs were out hunting tasty times in the London Marathon this year. Both Ian and Jon were making their eagerly anticipated debuts over the classic 26.2 distance. They were going into this race with fast half marathon times; Ian off the back of a 67.29 in the Hague probably the fastest half in the world! While Jon had a slightly more frustrating race build up at Reading where he was sent over 1 kilometre off course missing out on a possible 64m clocking even so the fitness was there for the big day.

The conditions for London were a little hot and there was a stiff breeze in the second half of the race. Both set off at a fast pace always looking to push their limits to the maximum, pure racing hounds. At halfway the clock read 68.41 (Jon) 69.59 (Ian) and were on course, however as they neared the 20 mile mark they were both well and truly in the hurt locker with no way out but to finish. Sucking up the pain of cramps (Jon) and a lingering cold (Ian) they came home in 2.21.48 (Jon) and 2.26.45 (Ian) two fantastic runs. 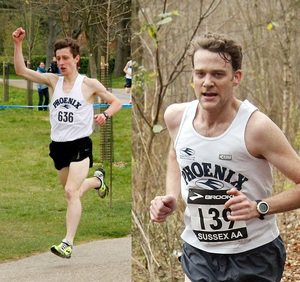