The National Road Relay Championships is regarded as the premier club event in the country, but to get to this exclusive event you first have to qualify through the regional championships. For Phoenix this is the Southern Championship which also happens to be the hardest qualifying race of the three regional championships, and usually requires a group of men in their late 20s and early 30s to deal with length of the race and toughness of the terrain. Team Phoenix this time round however were entering their youngest ever team to a senior championship, with an average age of 19 ½ years, but luckily these guys are disciplined to their sport and were up to the task in hand.

Finn Mcnally coming off his 31.25 10k two weeks earlier was given the task of leading the team off on the always hotly contested first leg, and with what has come accustom with his racing style he stuck it in from the gun, going with the pace and at times through the first of the two lap course setting it. Finn was reward for his aggressive racing style with the fastest time in the team 18.57. Second up was Max Pickard who managed to hold the same place that Finn brought the team in on (17th). Next up was Charlie Grice who gradually edged the team up 3 places to hand over to the youngest member of the team Jake Elliott who managed to keep the team in the mix even though he was making a huge step up in the age of the runners he is used to competing against. Sam Wade taking the penultimate leg travailed all the way from Wales just to make this race for the team, and even though he suffered from a massive nose bleed half way round the course he held it together to hold on to his position. Last up was Josh Guilmant who had been quite ill for 2 days before the race but with a lack of senior men to replace him, he decided to run and stuck in a solid run to move the team up to 14th and finish off one of the best runs for a Phoenix team in these championships.

Huge credit must be given to Paul Collicutt who travailed up with the team and was on hand to step in for the ill Guilmant had he been needed.

Only a day before the Junior Boys were showing just how strong the next generation of athletes could be with a fantastic 5th place in the Under 13 Age group. Top performance in the team was Matthew Berridge with a time of 10.57, this was 13th fastest on the day. He was backed up by his very strong team mates of Reuben Hoyte, Isaac Wright and Archie Davis who will all now be turning their attention to the cross country season. 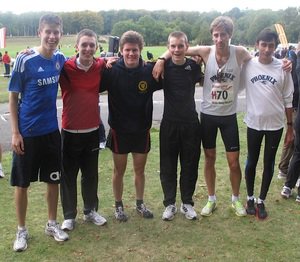