Lizzy puts power to the pedals to win the BUCS championships

Lizzy puts power to the pedals winning the 2011 BUCS championships

The success follows a second-place finish in the 10-mile time trial the previous weekend.

She said: “My time was not fast for the distance but given the undulating route and strong winds I'm happy with the result.”

This was the second medal in as many weeks adding to the silver in the 10 mile event which she competed in the previous weekend losing out only to Olympic hopeful Corrine Hall from St Mary’s university who beat her time of 24min10secs by a matter of 40seconds.

Lizzy, hopes to compete in her main event the Ironman triathlon in France this summer, and said of her weekend’s achievement, “It's encouraging that I can still be competitive in an event that isn't even my speciality.” 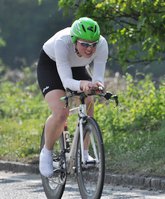 « Senior men and over 60 men triumph at Sussex Road Relays Charlie, Ray and the Under 13s kickstart the track season »