Paul Thomashas defeated opposition and won the right to take part in more cross country in Sussex.Paul's determination to race has caused England Athletics to re-think their inclusion policy.

Paul suffers from Clauda Equina Syndrome and uses poles to aid his running.In the past organisers have claimed that his poles may become a health and safety risk.

Last year he was banned from three races and disqualified from another for using ‘technical aids.’ This year Paul has faced further issues but has continued to fight for the recognition of disabled athletes.

Paul said "It is health and safety gone mad, organisers should be looking at ability not disability.”

Nigel Herron added: "Paul poses no more risk to himself or others than I, or any other athlete."

Paul has fought fiercely for the right to race in and has already completed two races which he was initially banned from this year.

Organisers of the Goodwood Relays and Haywards Heath Open Cross Country races told Paul he could not take part in their events upon his first request but his tenacity won them over.

Paul said: "Telling me that I may be a danger is against the Disability Discrimination Act. Organisers have to prove that I am more of a danger than anyone else to prevent me from running."

England Athletics will now “seek to ensure that we comply with the Equality Act 2010 and that we encourage our affiliated members to do so.”

The documents are currently being drafted but the overall aim is to ensure that “athletes with disabilities can participate as fully as possible within athletics events.”

Paul’s achievements were recognised by England Athletics when he was awarded the South East Region Services to Disability Athletics Award. He is now due to be considered for the national award within the category for his commitment and ongoing dedication. Paul’s website can be found at www.disabledathlete.co.uk. 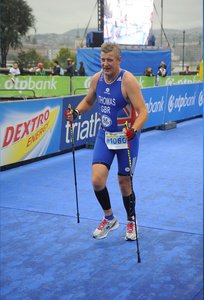