Despite injuring his knee and shoulder just before the English Schools Championships Charlie Grice proceeded to dominate the Inter Boys 1500m winning his heat and racing to victory in the final. After a slow first lap he took up the lead with 900m to go and gently upped the pace on each lap until no one could stay with him. His time of 3:52:25 is his 2nd best so far and also broke the championship record which had been held since the 1980s by Phoenix Old Boy Johan Boakes.

Next weekend Charlie will represent English Schools in Glasgow in the Home Countries Schools International, an event that Savannah Echel Thomson represented England and Phoenix at a few years ago.

A week and a half before the champs Charlie had won the BMC B 1500m at Watford in 3:48:7 to go 3rd on the UK all time U17 list behind Steve Cram and Johan Boakes.

At that same Watford meeting Will Durkin and Max Pickard ran pbs in the 1500m and 3000m respectively. 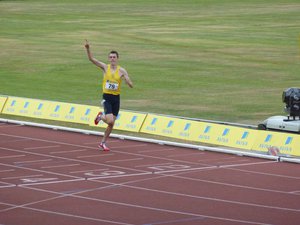