Paul Whelpton reports on the Almijara Trail Half Marathon:

"Possibly not the most sensible race to tackle whilst nursing a cracked rib (sustained in a fall on the relatively unchallenging terrain of Old Shoreham Road). But the Almijara Trail Half Marathon, through rocky ravines and climbing 1000m up tiny mountain footpaths in the Sierra de Almijara, was just too tempting, starting as it did just a stone’s throw away from the holiday flat we were renting in nearby Nerja on Spain’s sunny southern coastline.

Not the easiest race either for a tall skinny runner with a high centre of gravity and very poor balance, (as displayed to much amusement during our Wednesday Track session warmup drills). Slightly frustrating to see young nimble locals bounding past me on the long stretches of tricky downhill paths whilst I lumbered down dislodging loose stones and fearing the worst – though I only took a tumble once and made sure the cracked rib stayed clear of the impact! Uphills were lung-bursting but great fun – despite lots of scrambly bits that were hard to walk up without using your hands let alone try to run up. And as soon as the paths widened enough to be manageable for a wobbly runner like me I reeled in most of those who’d overtaken me on the tricky downhill bits.

Other things I loved were the great welcome from locals (plenty of spectators shouting encouragement even at the water stations right up in the mountains, and half a dozen runners must have stopped to help when I took a tumble); the totally amazing views of valleys mountains and sea; and the exhilaration of charging down the relatively easy finishing stretch - 3 km along familiar wide tracks and flat pavement down to the local Athletics Stadium - which helped me to the weirdest negative split I’ve ever done: slowest km 11mins 10 seconds, last km 3mins 50 seconds! At 2 hours 25 that has to be my slowest ever Half Marathon, but it got me on the podium as fastest V65 and with a prerace target of sub 2:30 I was pretty satisfied with my time. Will definitely be badgering Andy Pumphrey for some tips and working on my downhill technique so I can have another crack at this one next year!" 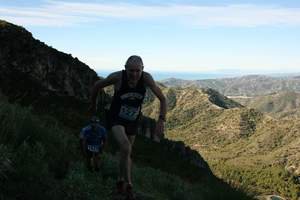