Phoenix saw three of its most experienced athletes compete for England in the Great Birmingham 10km on May 6th.

The race doubled up as an international Masters Age Group fixture between England and the Celtic nations and three of our clubmates ran in England vests having qualified at the Chichester 10k earlier this year. Paul Whelpton won the v65 category and Malcolm Kemp and Andrew Haig were 6th and 7th respectively in the v70s.

Paul has this to say:

“It was a scorching hot day in Birmingham which made warming up and lazing in the sun before and after the race very pleasant, though during the race itself I was gasping for water before (and after!) the only drinks station at 6k. The course was traffic free through closed roads and a short stretch of park in the city centre, and not as flat as we had anticipated! Great atmosphere amongst the England athletes, and great encouragement (and photos!) from Bob Page and one or two other Arena 80 supporters. Delighted of course to win my V65 age category with a couple of minutes to spare, though firmly put in the shade by Tonbridge's V50 Maria Heslop whose 36:28 was the best age-graded performance of the day at around 94%.

Looking forward to the World Masters Champs in Malaga in September now!” 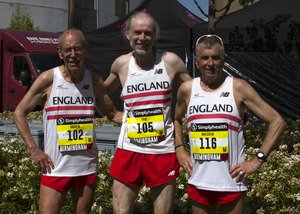 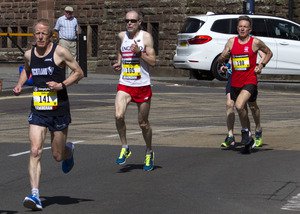 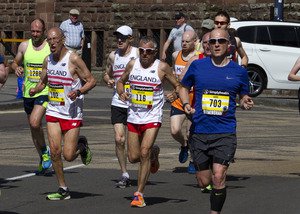 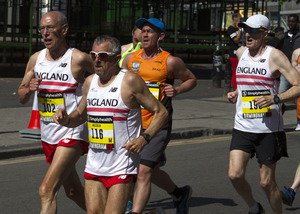