Why do Cross Country?

Why do Cross country?

To sum it up cross-country racing is short, fast-paced running across mud, grass and woodland paths. The distances are typically 2k for U11, 3k for U13, 4-4.5k for U15. For the U17, U20 and seniors the races are typically 5k for ladies and 8k for men. There are many reasons why people take part in cross-country so I thought I would share some of them with members who haven't yet experienced a cross-country race, because in my opinion they are missing out!

Get fit quick - Nothing gets you fitter quicker, a XC race is a short, sharp, fitness kick-start.

Strength and Balance - It is a great way to build strength, particularly in the ankles, ‘glutes', lower-back and stomach, all of which you will use to run through bogs and up the short, sharp hills, which are a common feature of a cross country course. It also improves your sense of balance, something we take for granted but is essential for healthy living and also for performing in sport. All great runners have great balance, look at how Mo runs.

They are cheap - The races are always cheap to enter (around £5) with entry on the day for the main Sussex league so really accessible compared to other running races. One of the benefits of being a Phoenix member is that the club often pays for your entry into the bigger events such as the Sussex champs, Southern champs and Nationals.

Team spirit - You will score points in each race/ race league, which contributes to an overall team score for your club. You don't have to be a fast runner to be an integral part of the team as a minimum number of athletes are also needed for a team - this is not always met across the age categories.

Competing for Phoenix - It's a nice way to represent your club and give back to the coaches who have trained you over the year, competing against clubs in the county, south of England and the whole country.

Self-achievement - The race courses are consistent over the years being held at various locations including Bexhill, Lancing, Hickstead showground and Stanmer. This allows you to compare times very easily and give yourself a goal to achieve over winter. There are also individual medals up for grabs for each race/ race league.

Fun - A really good reason to take part is that it is fun. After struggling through the mud and hills, you can share your trials and tribulations with your fellow club members.

Racing rather than times - because each course is different, and the distances are approximate, cross country is not really about getting personal bests; however it is about racing against your nearest competitors who you will start to recognize after a few races. Knowing that you want to catch one more person or hold off a challenge from another racer brings a whole new dimension to the sport.

The cross-country season is throughout the winter and there is a main Sussex league as well as individual events, which can get confusing. The key races/leagues of the season are:
Sussex League - Series of four races between October-February
Sussex county champs - The race where all the Sussex clubs compete against each other.
Sussex masters county champs - This race is exclusive to masters only (ages 35 yrs+ for women and 40 yrs + for men).
Southern champs - All clubs in the South of England compete against each other in a race.
Nationals - The race against clubs across the whole country!

Thank you Bobby for this report 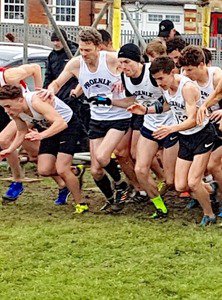 « Mixed results in the Cross Country Championships All go with Turbo »