The Hove Prom news report for 9 December put it this way:
Not long after we started, we had indications of something momentous about to happen, when our timekeeper, Deborah, clocked a runner coming through at just over 7 minutes. Then, mere minutes later, while the timekeepers were still chatting away, some of our runners shouted at those of us at the finish funnel, that the first finisher had already made the second turn. We frantically looked up the previous course record of 14:46held by Finn MCNALLY since August 2016, and realised that it might about to be broken! Brighton Phoenix runner, a first timer on the prom, Robbie Fitzgibbon, then crossed the line at 14.31, breaking the previous record, in addition to the age-graded league record for SM20-24of 89.21 %!

Finn retains his record at Preston Park and, of course, we hold a good number of the age group records locally: 2 at Bevendean Down, 4 at Preston Park, 5 at Hove Park, 8 at Hove Prom. 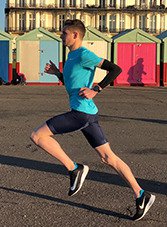 « Almi succeeds for Sussex Brilliant turn out for Sports Hall »