We arrived in Rotterdam Wednesday evening. It was raining and very windy; the general weather forecast for the week.
On Thursday we did the swim recce and picked up the race pack from registration. Although the swim was in a dock, it was still pretty choppy due to the wind and it was still raining. At the registration we were asked to check that the disposable timing chip was working by taking it along to a reader where we also had our photo taken. Although there were queues at most desks there was none at my numbers slot so I could just go straight to the desk.
On the Friday I rode most of the bike course and it actually stopped raining for a while.

The standard distance was two laps of a technical course; tight turns, narrow parts, speed bumps, cobbles, some bridges and even a set of steps with a wooden ramp up them followed by quite wide cycle paths.
The race had a split transition meaning that T1 was on one side of the river Maas and T2 was the other side at the end of the bike course.

On Saturday afternoon we setup in T1 with just our bikes being racked. It was raining again!
On Sunday morning we put our running gear in the numbered bike slot in T2 and then caught a boat shuttle across the river to finish setting up in T1. The sun came out and the wind dropped raising the temperature up to 17 degrees - a perfect day for racing.

My start time was 11:05. This had already been put back from 10:10 due to the local organising committee realising that the course would have been too crowded on the original start times and so made longer gaps between the waves. On the morning there was an extra 15 minute delay due to problems on the bike course.
About an hour before starting I decided I should do a short run warm up just to make sure that the slight injury on my right ankle would not be a problem. After some strides everything seemed ok.
Time to get ready! I put on my wetsuit and put my post race clothing into an orange bag with my number on and left it at the bag drop to be taken over the river to the finish area. 30 minutes before the start we went into the start pen ready to go on to the pontoon. About five minutes before the start we filed down, getting into the water one minute before the start we are told have one hand on the pontoon. The starter said " on your marks" and sounded the hooter and off we all went. About a minute later I realised my goggles had started to fall off. I managed to get them back on quickly enough and then started to get into the swimming rhythm. I found out later the official swim was 1700m. My time was 24 minutes and 23 seconds.

To get out the water we went up some steps onto a ramp and on to the 800m of blue carpet which took us to T1.Transition went smoothly taking 5 minutes 18 seconds. The wetsuit and goggles had to be put into a blue bag with your number on which was then taken to the finish area. Out on to the bike, which I quite enjoyed, there was certainly things to think about; there were a couple of incidents when someone overtaking me tried to pass where there was not enough room and almost took me out and another time one of the locals on a mobility scooter rode down the course towards me! I tried to concentrate on the pacing for the bike as on the previous two races I had faded on the run - I think that went fairly well. Bike split was 1 hour 7 minutes 57 seconds.

At T2 I somehow managed to miss my rack and had to double back and then when I got to my number slot there was someone else's bike laying on top of my shoes. It was all a bit of a mess and I probably lost a few seconds but what can you do? I was not contending for medals today, not to worry. I got onto the run feeling ok. The run course was 2 laps of a looping route on the footpaths of a municipal park. I did the first 2 kilometres in 9 minutes and think I kept that pace going throughout, however, the run was short and my time was 42 minutes 3 seconds.

At the finish there was cake, bananas, energy drinks, water and a finishers medal.
To my relief the orange bag was there with my clothes in and in a different tent was my blue bag with wet suit in. Not everyone was so lucky.
Overall I was happy with the results and enjoyed the event. The following day, however, my right ankle virtually seized up and walking was quite difficult. I'm glad to say this is now almost back to normal after a few days. The doctor says it could be a repetitive strain injury and I should see a physio for treatment.

Thank you Malcolm Hughes for this report 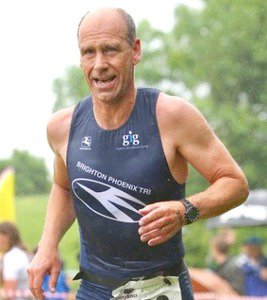 « PBs at the Champs On Track »